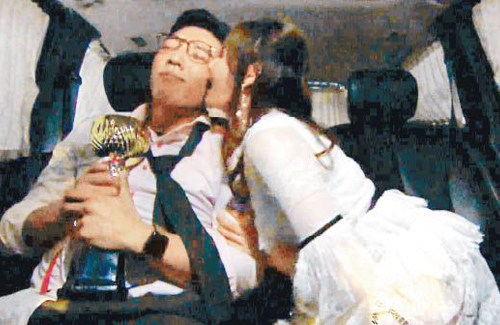 A recent episode of the sitcom parodies the real-life scandal.

In the particular episode, starlet Cherry enters the same cab with a very drunk Sai Long Sang, despite a friend’s objection. During the ride, Cherry flirts verbally and initiates bodily contact. Unknowingly, their intimate actions are captured on camera by the driver in the front seat, who later auctions it for a huge sum of $30 million HKD.

The incriminating video was uploaded on the Internet and the news of Sai Long Sang cheating on his wife Jenny spread around the company quickly. Sai Long Sang is so troubled that his hair turns white overnight, and later holds a press conference where he did a 90-degree bow and apologized. The character even repeated the same memorable phrase Andy Hui (許志安) uttered at the press conference in real life – “I am a man who has gone bad!”

Sharp-eyed viewers quickly saw the numerous similarities between the onscreen plot and Andy Hui-Jacqueline Wong cheating scandal in real life. These coincidences include how the incident happened after an alcohol-induced evening, how the female was the one who made the first moves in the cab, and how the driver’s secret video was the crux to exposing the scandal in both cases.