“Dead Wrong” Roger Kwok Gets Skinny to the Bone with CGI 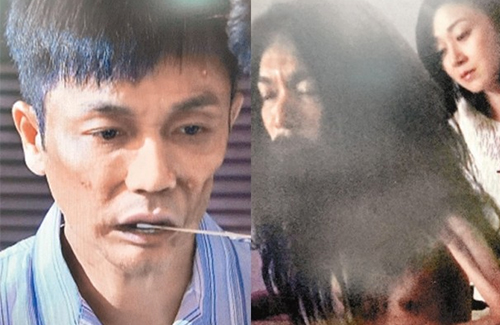 TVB’s last anniversary drama for the year, Dead Wrong <致命復活>, will have a two-episode premiere this Sunday, November 20. Produced by Lam Chi-wah (林志華), the suspense drama stars three-time TV King winner Roger Kwok (郭晉安) as Vincent, a Hong Kong physician who was held hostage in Vietnam for ten years. When he finally escapes and returns to Hong Kong, he learns that he was declared dead, and that his wife Cathy, portrayed by Joey Meng (萬綺雯), had married his best friend Ho-yan, played by Kenny Wong (黃德斌). Vincent vows to start his life anew—and seek vengeance.

Dead Wrong took over five months to complete. The cast went to Ho Chi Minh City in Vietnam for some outdoor photography. For his role, the 175 cm Roger dropped to a meager 140 pounds. The studios spent an additional $1 million HKD on sophisticated CGI to make Roger even skinnier and gaunt, physically dropping him to only about 80 pounds.

“At first, Lam Chi-wah was worried that losing so much weight in a short period of time would affect my health,” said Roger. “But as long as we coordinate well, and use CGI in addition to my weight loss, the results would be fantastic.”

In an earlier interview to promote the show, Lam Chi-wah said he has the confidence that Roger would win TV King this year with Dead Wrong. Roger added, “If so, it will be my fourth win. It’s record-breaking! However, I hope that the show as a whole gets good results too, not only me.”

Playing his wife, Dead Wrong is Joey Meng’s third collaboration with Roger, after the Inbound Troubles series <老表系列>. Lam Chi-wah introduced, “She is Roger’s wife, but Roger goes missing for 10 years. She confides in Roger’s best friend Kenny, and the two fall in love. I wouldn’t consider Kenny to be the third person, and Joey wasn’t wrong for what she did. But no matter what, the decisions she make will hurt either Roger or Kenny.”

Kenny Wong stars as Roger’s close friend, who ends up marrying Joey during Roger’s absence. Lam Chi-wah describes Kenny’s character as a man with warmth and love, and that he would do anything to protect Joey from harm. But the man is far from perfect, as he does hold a well-kept secret related to Roger’s abduction.