Model-turned-actor Edward Ma (馬志威) shot to public recognition after starring in TVB’s I Bet Your Pardon <荷里活有個大老千> in 2019. But rather than staying in Hong Kong to further develop his career, he decided to make a break in Mainland China, earning a supporting role in the modern romance Nothing But Thirty <三十而已>, which premiered on Shanghai’s Dragon Television on July 17, 2020.

Starring as the rich playboy Liang Zhengxian, Edward shares a romance arc with female lead Jiang Shuying (江疏影), who plays Wang Mannei. Meeting Mannei for the first time at a yacht party, Zhengxian sets off to pursue her. Zhengxian spends extravagantly on her, gifting her with credit cards, cars, and even a house. While Zhengxian’s true intentions have yet to be revealed, many netizens believe that Zhengxian is using Mannei for his own gain. In an earlier interview, Samantha Ko (高海寧), who plays the ex-girlfriend of Liang Zhengxian, had described her character as a woman who has to endure her boyfriend’s constant betrayal.

Edward didn’t reveal his character’s ending, but did imply in an interview that his character is more than meets the eye. “Liang Zhengxian is a very confident man. He’s rich and knows how to enjoy live. He never believes that he’s wrong. I am personally very different for him, but as an actor, it is my job to do the role justice.” 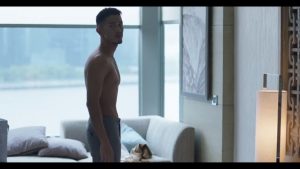 Asking if he is a sweet talker like his character, Edward laughed and said, “I suppose that I’d be touched with his actions if I was a woman. But I’m not [a sweet talker]. I’m learning everything from the director. I think the most romantic thing I’ve done was surprising my girlfriend while I was still filming the show. I secretly flew back to Hong Kong from Shanghai to surprise her.” He added later, “I actually don’t think it’s that romantic, haha!”

Nothing But Thirty is Edward’s first mainland Chinese drama. Edward shared that the language barrier was his biggest struggle. “I studied constantly. After my lessons, I would go back to my hotel and memorize all the pinyin.”

As for working with costar Jiang Shuying, Edward said nothing else but praises, calling Shuying a gorgeous woman who is not only professionally observant, but also very easy to get along with.

The only bed scene in the series features Edward. He said, “I didn’t know I had to show skin until that day of filming. Because of all the traveling, I lost a lot of weight, and didn’t have time to train. The only thing I could do was to do more push ups before filming the scene.”