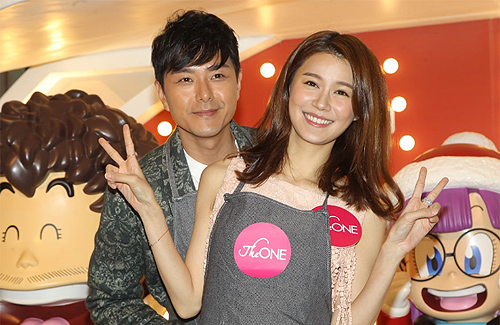 Over the course of their two-year relationship, Edwin Siu (蕭正楠) and Priscilla Wong (黃翠如) were frequently reported to be planning their wedding. However, they have always denied the rumors. Edwin said, “It will happen when it is the right time. I really can’t tell you when it will happen. Priscilla and I are people who follow our hearts. When we feel like doing something, then we will do it.

“I am of course jealous of people like Raymond Cho (曹永廉). When he comes home, he is surrounded by his children.” When asked how many children he would like to have, Edwin said, “I feel like I would have many children, because my father was very loving to me when I was younger. I believe that at some point in life, I will feel that it is time to share that love with my children.”

With the success of Priscilla’s family business, she has become an overnight heiress. In actuality, Edwin is also a business owner himself and invested in a hamburger joint with his cousin. Business is doing well and the duo opened a second location recently. Of all things to invest in, why did he choose to invest in the food industry? Edwin reflected, “When we were younger, we worked at a Japanese restaurant during the summer. At the time, we wondered when we would have our own shop. Last year, my cousin said he is interested in starting a business. We thought about it for a long time and wondered what kind of business we should do. I suddenly thought about hamburgers, because Priscilla likes eating hamburgers.”

In addition to his business ventures, Edwin is also seeing a rise in his popularity with Hong Kong viewers due to his role in the time-traveling comedy, A General, a Scholar, and a Eunuch <超時空男臣>. The drama marks Edwin and Raymond’s fifth collaboration. Having filmed together for four months, Edwin joked, “This time, we really did see each other every day. Actually, we are good friends in private. Sometimes, when he yells at people without thinking about it on social media, I would help him explain and apologize [to the other party] and then reprimand him.”

Raymond, who was also present for the interview, retorted, “Sometimes, he doesn’t even know what’s going on and butts into business. We actually met in 2012 while filming The Confidant <大太監>. Because we kept in touch in private and collaborated on a lot of projects, we established a friendship very quickly. Actually, I have a lot of friends at TVB, not just him!”

Edwin, on the other hand, shared, “I don’t have a lot of close friends in private. He is one of them. Even he and Priscilla grew close. I am someone who is very closed off, but since meeting Raymond, I cannot resist the temptation to tease him whenever I see him. He is also very willing to help others.”