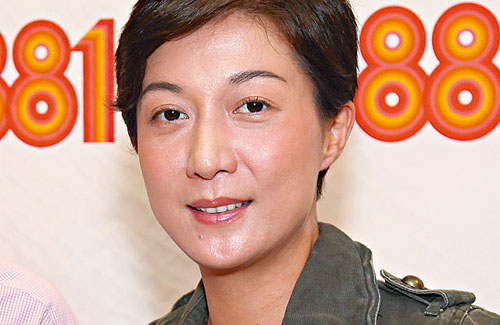 For Elaine Ng (吳綺莉), the pressure of being Jackie Chan‘s (成龍) ex-lover never left. Elaine had an affair with the superstar and gave birth to daughter Etta Ng (吳卓林) in 1999. Struggling as a single mother, Elaine suffered from alcoholism and even faced child abuse allegations recently. With her private life once again under scrutiny, Elaine said she does not blame Jackie for the mother and daughter’s circumstances.

While Jackie was heavily criticized for denying the status of his illegitimate daughter, Elaine never held a grudge. Rather than hating Jackie, Elaine only blamed herself, stating that both parties knew what they were getting into.

Elaine sighed, “No, I never blamed anyone. There’s pressure in every thing you do – it comes in a package. If you had to ask me whom I dislike the most, I would say myself. I’m not joking!”

Shortly after Etta’s birth, Elaine moved to Shanghai to avoid pressure from the Hong Kong media. Elaine used her artistic talents to earn a living and provide for Etta. Elaine denied that she had received $30 million HKD in financial support from Jackie.

No longer wanting to hide herself away from the public, Elaine moved back to Hong Kong with Etta several years ago. Elaine reasoned, “I felt that we would be able to handle the pressure! I need to work. Why is there a need to explain to others how we live? When a man and woman become involved, both willingly did so. The past is in the past; why keep talking about it?”

After starring in TVB’s Highs and Lows <雷霆掃毒> in 2012, Elaine filmed variety programs at i-Cable. She explained how she can never run away from her scandalous past, “Everyone knows who I am already – it’s impossible for me to leave the entertainment industry! There are some things you can never escape from! But honestly speaking, I’ve become very tired of being myself.”

The Future For Elaine

Similar to most single mothers, Elaine focused on raising her daughter while sacrificing her own love life. Although Etta is already 15 years old, Elaine said she has not dated. “It’s not something that I really think about, but it would be great if there was someone! I do want to find a partner, but these things have to come naturally.”

Besides working hard to provide for the family, Elaine promised to decrease her drinking. Reflecting on her family situation, Elaine admitted trying hard to compensate to Etta for the lack of a father figure in her life. “I gave birth to her. Some things are not Etta’s fault. Perhaps these [child abuse allegations] happened because in the last two years, there have been some details that escaped my notice. I think I have to slowly digest them with Etta.”