Elaine Yiu on a Date? 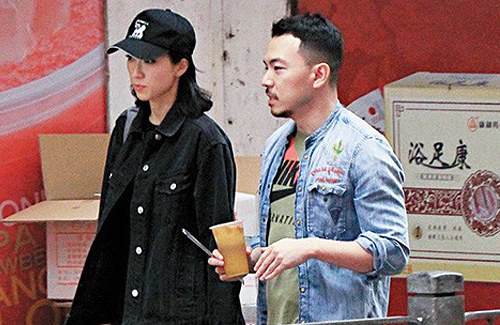 Thirty-eight-year-old Elaine Yiu (姚子羚) has been focusing all her energy on work since breaking up with long-term boyfriend Cheng Tsz Bong (鄭子邦) one year ago. Other than focusing on work, it seems that she has opened her own jewelry shop.

She had dated Bong for three years and had moved into his home at one point. So it came as a shock when in March 2018, she confirmed on social media that they had to come a mutual understanding to separate. After breaking up, Bong led an active love life. He was seen acting intimately with Roxanne Tong (湯洛雯) at a nightclub and to have gone volunteering with Natalie Tong (唐詩詠).

On the other hand, Elaine has been occupying her time with work, filming three dramas in a year. She filmed Justice Bao: The First Year <包青天再起風雲> last March and will be the female lead in new drama Of Greed and Ants <黃金有罪>. Currently, she is filming Chinatown <唐人街> with Grace Wong (王君馨) and Ruco Chan (陳展鵬).

Recently, Elaine was sighted in Causeway Bay with a muscular, bearded man in his thirties; the man was attentive to her needs and bought her bubble tea. They were seen talking continuously and eventually entered a commercial building. The two entered a jewelry shop which had Elaine’s promotional posters on the walls. It seems that she has strong ties to the store as she was very invested and organized the storefront.

As a vegetarian, she has always had a very slight body frame but due to the extra work from taking care of the business, Elaine has lost 12 pounds and currently weighs less than 100 pounds.

The mysterious man and Elaine sat down to discuss new items and would sometimes lean on each other. Their intimate behavior leads one to wonder whether the mystery man is her business partner or new love interest.