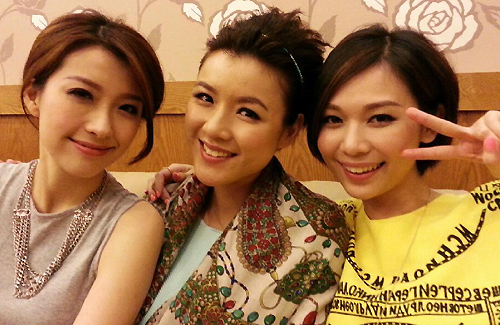 Netizens were caught quite off guard when Elaine Yiu (姚子羚) was photographed smoking a cigarette with costar Matt Yeung (揚明) while on a filming break in Malaysia.

As reported by Hong Kong tabloid magazine Oriental Sunday, both Elaine and Matt have risen in popularity among  netizens in recent months, thanks to their critically successful performances in TVB dramas, Bottled Passion <我的如意狼君> and Master of Play <心戰>, respectfully. Elaine and Matt will also be starring in the upcoming TVB drama Slow Boat Home <情越海岸線>, which is slated to premiere on May 13.

Known for her pure, elegant, and sweet image onscreen, Elaine has been added to TVB’s growing pantheon of beautiful “goddesses” by netizens. When the photos of Elaine smoking were published, they reportedly “disappointed” her fans, as many expected Elaine to be different from a “typical Hong Kong girl.”

Reports also alleged that Elaine displayed “diva behavior” when a crew member approached her to give her an identification card. Matt, who was sitting next to Elaine, politely acknowledged the crew member, while Elaine responded nonchalantly.

Nonetheless, the tabloid magazine praised the refined Elaine for being “the most beautiful [Outbound Love] actress”, outshining main female leads Aimee and Xiawei.

In related news, Tony Hung, who joined TVB in 2012, reportedly did not get along very well with the rest of the Outbound Love cast. Tabloid reporters observed that Tony preferred sitting by himself and playing with his phone during breaks.