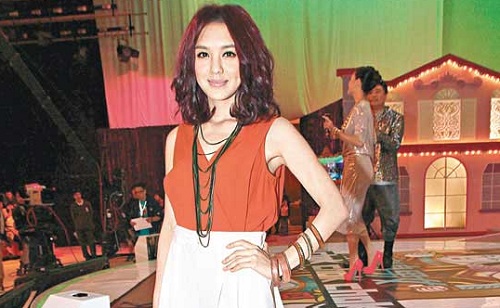 Yesterday night, past rumored couple, Ron Ng (吳卓羲) and Ella Koon (官恩娜), appeared at the same time in TVB City, filming for two different variety shows. Although Ron and Ella expressed that they did not know the other party was around, both of them displayed abnormal behavior upon hearing the news. Ella professed that the makeup room was too packed and moved over to the other side to do her makeup, obviously having the intention to avoid her “former love”.

Ron Ng, Julian Cheung (張智霖) and other artists were filming at TVB last night for Jade Solid Gold<勁歌金曲> while at the same time, Ella and Christine Ng (伍詠薇), were in another studio, engaging in games for <變身男女Chok Chok Chok>. Although both Ron and Ella both shared the same tone and denied knowing that the other party was here, the graciousness of both parties was extremely different.

Would Surely Address the Other Party

Ron was asked whether he would say “Hi” to Ella if they bumped into each other. In reply to this, Ron responded, “Yes, I will. If we see each other, of course I will address her! We saw each other at a public performance the previous time and we did address one another.”

As for Ella, who has been hiding in the studio, denied that she had avoided Ron on purpose, “No lahs! When I first arrived, I heard from my colleague that there was no spare seat in the makeup room (Note from reporter: The makeup room will not not have enough seats for everyone) and arranged for me to come here to do my makeup. I did not know he was there.” (What if you had known?) “Then that’s also fine with me. I will address those that I know. If you see someone and you don’t address them then that’s impolite, having no manners at all!”

The reporter asked Ella if she and Ron met, would she give Ron a warm hug? Ella did not answer directly to the question and said meaninglessly, “Hope I will win tonight!”

Working On Both His Birthdays

Other than that, Ron revealed that it was his lunar birthday yesterday night and his mother had prepared a red packet for him. Ron also pointed out that his western birthday in early September will be spent working, “This series will only wrap filming during the middle of September.”  (Will you take one day of leave to celebrate?) “I cannot lahs! I wish to finish filming this series as soon as possible because the weather has been difficult and the filming outfit is heavy.”

When mentioned about his rumored girlfriend, Viann Zhang (張馨予) and her scolding battle with his fans through Weibo, Ron expressed that he knew nothing about this incident. He hoped that his fans could stay calm as whoever was attacked was not a good thing. Asked whether he would ask Viann to bear with it and give way, Ron replied, “She will handle it by herself, I will not get involved in this.”