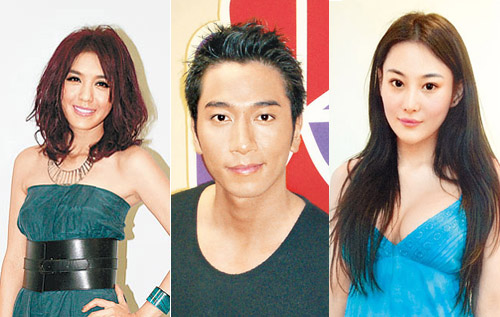 Singer Ella Koon (官恩娜) has been running into a slate of bad luck recently, bumping into unwanted people everywhere. Last week, when she went to TVB for some filming, in a bid to avoid being at the same venue as former rumored lover, Ron Ng (吳卓羲), Ella actually turned to hiding in the filming studio. Unexpectedly, last night, Ella nearly bumped into Ron’s current lover, Viann Zhang (張馨予). Fortunately for Ella, Viann cancelled her appearance at the very last moment, allowing Ella to heave a sigh of relief and didn’t have to hide in the studio to avoid any awkwardness.

Last week, when Ella Koon went to the TVB City at Tseung Kwan O for the recording of <變身男女ChokChokChok>, the filming slot coincided with program Jade Solid Gold <勁歌金曲> for which former rumored lover Ron Ng was at the opposite studio filming. To avoid bumping into Ron, Ella hid in the studio. Surprisingly, after a week, history still repeated itself!

Last night, Ella went to TVB to film Jade Solid Gold and the timing coincided with the opposite studio’s <變身男女ChokChokChok> for which Ron’s current new lover, mainland star Viann Zhang, had been invited to go on. Fortunately for Ella, this awkward scene of Ron’s new and former lover gathering together eventually did not take place. This was because Viann who had initially agreed to go on the Chok program, was ordered by the drama team to rush back to mainland to work, thus cancelling plans to appear on the show at the very  last minute.

Scared It Will Affect Work

Ella who managed to escape from the awkward situation, was asked by reporters whether she could finally breathe freely again. In reply to this, Ella said, “Don’t say it until like that lahs! Don’t wish to talk about other people’s matters.” (Will you be embarrassed if you bumped into her?) “No, I also don’t know her (Viann). I don’t wish to say anymore; it’s none of my business. I’m just doing my own work. As a spokesperson for this product I’m endorsing, I don’t wish for any rumors, fabricated tabloid reports or strange news to affect my work.” With regard to her hiding from Ron Ng last week, Ella expressed that she didn’t avoid anyone and she was just trying to do her own job well.

The executive producer of the Chok program, Wilson Chin (錢國偉) however said, “Viann Zhang called me and abruptly cancelled plans to appear on this show because of work but we didn’t know they might bump into each other here.” (Was it to avoid Ella Koon?) “I really don’t know. If I had known (that she would have bumped into Ella here), the more I wouldn’t tell Viann lahs.” Wilson continued to say that Viann will be coming to Hong Kong again to attend the movie premiere of her new film thus he may invite her (to appear on the variety program Chok) again.

In other news, Hong Kong sexy model, Carol Yeung (楊梓瑤), who is known for her huge assets appeared on the program Chok in a well covered up outfit. Carol smiled and said that this show was about posing and looking Chok and not to show off her bod.

Carol revealed that earlier on when she collaborated with Viann, they did have a small talk with each other but both of them did not discuss about affairs of the heart. Carol also expressed that she was envious of Viann for being able to date as she herself has not dated for a long time now.

When asked about her rumors with director Patrick Kong (葉念琛) and getting snapped clubbing together,  Carol responded, “We are only good friends. He’s so talented of course there will be many girls who will fight for him.” The conditions Carol later listed when seeking a boyfriend seemed to resemble Patrick Kong, “I like guys who are talented, not necessary to be handsome, big or mighty. Even a fat man would also do!”

Ah K: Such a bummer! I wonder what would happen if Ella Koon had actually bumped into Viann Zhang. Knowing Viann’s alleged intense jealousy, would a cat-fight have occurred? *Grabs popcorn*