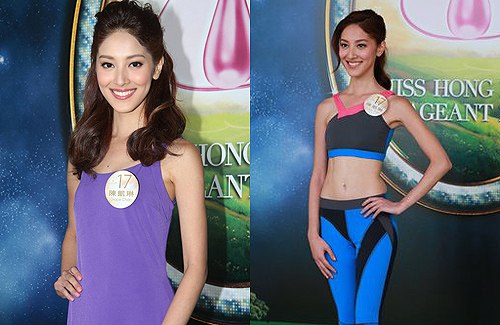 Known for his ruthless comments about pageant beauties, Eric Tsang (曾志偉)  recently shared this thoughts on this year’s Miss Hong Kong winners, saying Grace Chan (陳凱琳) is at a disadvantage due to her skinny frame.

On September 3, Eric attended an event at a senior service center on behalf of the Hong Kong Movie Star Sports Association Charities. As the organization’s chairman, Eric was present to kick start a resource redistribution plan which will receive donations of household appliances and gift them to low-income families and elders in need.

As one of the celebrity voters for this year’s Miss Hong Kong pageant, Eric was asked to comment on winner Grace Chan, whose petite body inspired local media to nickname her “Flat-chested Miss Hong Kong”. Eric agrees that Grace’s physique could have cost her the crown. “Even though [Grace] is very photogenic, if we were to use traditional judging standards, Sisley Choi (蔡思貝) and Moon Lau (劉 佩玥) had a better chance of winning. However, since it was decided by popular vote this year, there is no opposition regarding the results.”

During a TVB news interview after her win, Grace spoke candidly about her views regarding Hong Kong’s Chief Executive elections, showing her support for a more democratic voting process. As this is a controversial topic, Grace’s comments were eventually cut before the segment aired. When asked to comment about this incident, Eric said he was not aware of what Grace said but feels that Miss Hong Kong should not become involved in politics.

Regarding the other candidates, Eric said that many this year have the qualities to become TVB artists. Popular contestant Virginia Lau (劉溫馨) is said to have won over TVB executive Virginia Lok (樂 易玲), and is being considered for a contract. Speaking about Virginia Lau, Eric agrees that she definitely has the potential but urged her to lose her accent as soon as possible.