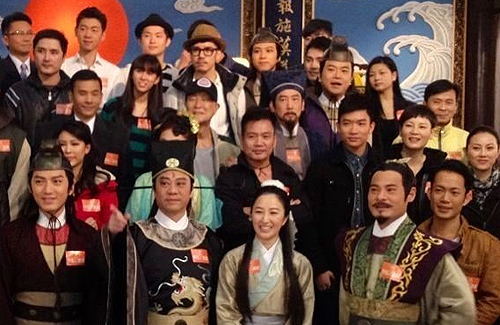 For Esther’s fans, this is her long-awaited comeback series since becoming a mother and slowing down her acting output. To the delight of many, Esther will reunite with Bobby since their last onscreen performance in Armed Reaction 2 <陀槍師姐 II>.

In Esther’s eyes, Bobby remained the same after more than 10 years. She teased, “Still king of NGs! He will just make up some 4-character phrases to cover his mistakes!”

Filming for Love Reverses Three Lifetimes of Fate is currently underway at TVB Studios. Bobby hopes to be able to grab at least 8 hours of rest. Even then, he has to work the remaining 16 hours.

Despite filming only one scene per day, Esther is still not used to acting onscreen once again. She said, “The schedule is comfortable now compared to years back. However, I am still not used to working through the nights.”

The cast was interviewed on their responses to the government’s pending approval of new free broadcasting TV licenses. Esther began her career at ATV, who has strongly opposed to the issuing of the new TV licenses. Asked if the troubled ATV will go out of business if the licenses were issued, she responded, “If you look at it negatively, it looks like it may. But things may just turn out positively. I hope ATV will be able to get back on its feet.”

Bobby thinks that the additional TV licenses may not be a bad thing, as he foresees that there will be more opportunities for the newcomers to attempt bigger roles and he believes that ATV will not go bust so easily, as the station has survived past challenging circumstances. “Sometimes the objective of some businesses may not be so much as to earn money. Perhaps they are doing it partly out of charity? And if that is the case, perhaps they have another money-making businesses?”

It is rather unanimous among the other cast members that issuing new TV licenses may actually be beneficial for the existing television companies as competition can serve as the basis for improvement.