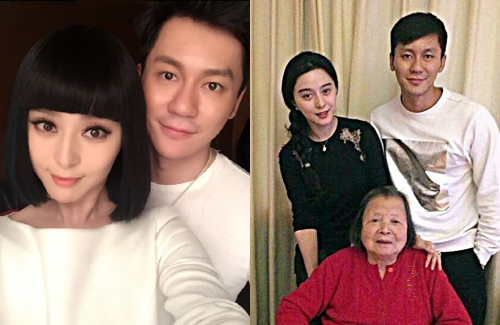 After countless speculations, The Empress of China <武則天> stars Fan Bingbing (范冰冰) and Li Chen (李晨) finally confirmed their relationship. On May 29, Li Chen posted a selfie of himself with Bingbing on Weibo, with the message “Us.” This post was later shared by Bingbing on her Weibo a minute later. Over a million netizens rushed to congratulate them.

The couple reportedly began dating soon after working together on The Empress of China, a hit drama in China, Hong Kong, and Taiwan. In her 18-year career, this is the first time Bingbing has gone public with her romance.

This Valentine’s Day, the pair was spotted together in Shanghai. They openly flirted on Weibo, and there were also paparazzi shots of them wearing matching watches and necklaces. Li Chen also brought Bingbing with him when he went to visit his grandmother.

It was said that the couple are planning to get married soon, but this was later denied by their managers. Li Chen’s representative said, “Thank you everyone for your concerns and blessings. They will let everyone know if there is [a wedding].”

Bingbing and Li Chen’s decision to go public with their relationship is all thanks to Huang Xiaoming (黃曉明), who has recently announced his marriage to Angelababy. While promoting The White Haired Witch of Lunar Kingdom <白髮魔女傳之明月天國> with Xiaoming last year, Bingbing had said that she would go public with her relationship when Xiaoming got married.

Xiaoming remembered Bingbing’s promise. He congratulated Bingbing and Li Chen on Weibo, writing, “No need to thank me.” Angelababy also congratulated the couple, “Wow, so much happiness coming our way!”

Bingbing admitted that one of her goals in life is to get married and start a family. She praised Li Chen for being a great boyfriend with a wonderful personality.