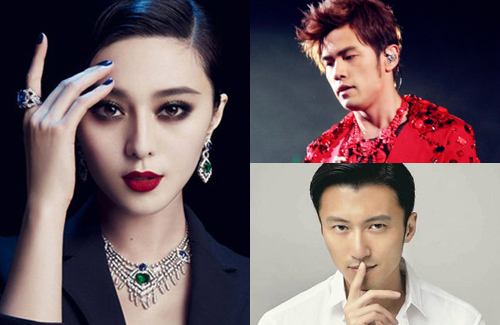 Riding on the success of her latest historical epic The Empress of China <武媚娘傳奇>, Fan Bingbing (范冰冰) tops the Forbes China Celebrity 100 list for a third year in a row.

Taking into account earnings and media exposure rate, Forbes China released its annual ranking of the most influential celebrities yesterday.

The success of his food program, Chef Nic <12道鋒味> and his reconciliation with Faye Wong (王菲) earned Nicholas Tse  (謝霆鋒) the third spot on Forbes China 100.

Close behind was Jackie Chan (成龍) in fourth place, with 96 million RMB in earnings. Jackie’s box office clout was not hindered by son Jaycee Chan‘s (房祖名) drug scandal. Jackie hopes his son will continue to use his celebrity status to make a positive influence on those around him.

Other popular Hong Kong artistes that made the list were Andy Lau (劉德華), who secured a spot at #8 and Eason Chan (陳奕迅) who easily placed #10 with the recent release of his new song.

In #91 last year, G.E.M made the biggest jump on the list due to her greater popularity after appearing in I Am A Singer <我是歌手>. This year, G.E.M was #11 on the list, surpassing Angelababy, who was 12th on the list.

Ranked on the list for the first time, William Chan (陳偉霆) was at #70, beating out his girlfriend Charlene Choi (蔡卓妍), who placed #95. Since the beginning of their relationship, many regarded William as falling behind in the shadows of Charlene. However, since filming Mainland drama The Sword of Legend <古剑奇谭>, William surged in popularity and became a household name in China.