Korean group GOT7 member Jackson Wang (王嘉爾) is a handsome, talented singer and dancer with a loyal following of die-hard fans. Sometimes his fans show their appreciation for him in unique ways. Recently, he held a concert in Amsterdam, and halfway into the song, a fan suddenly threw a bra at him.

Dressed in an all-black outfit, Jackson was nodding to the beat of the music and walking toward the front of the stage when a white bra suddenly landed right in front of him. Since the singer was wearing sunglasses, he couldn’t tell what the object was. He stopped walking, pointed at the mysterious item on the floor, took off his sunglasses, and then bent over to take a good look at the object. After staring for a few seconds, Jackson realized it was a bra, and he looked a bit stunned. Jackson being Jackson, he calmly put his sunglasses back on and continued to walk forward silently.

Netizens laughed at Jackson’s reaction and complimented the bra. “The size of the bra is not bad, laced-trim, I like.”

But some fans could not accept such “disrespect” toward their idol. Some asked, “What type of culture is that?” and “Are they sick?”

Others said, “I can’t accept such openness” and “It will affect his image.” 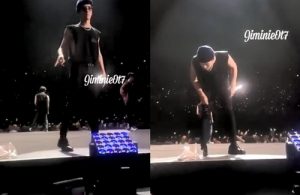