By addy on September 16, 2013 in Celebrity Weddings, NEWS 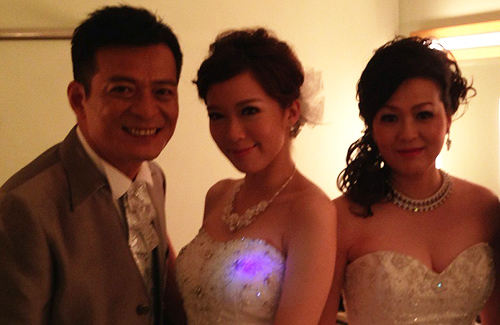 The couple celebrated their anniversary with charity work. Along with their daughter, 23-year-old HKTV actress Adrian Wong (黃芷晴), the dog-loving family urged their fans to support the training of guide dogs for the blind. The charity dinner collected over $630,000 HKD.

At the mention of Faye Wong (王菲) and Li Yapeng’s (李亞鵬) divorce, Felix said, “I was shocked when I heard it and would never predict that. I feel that they really had the heart for charity, but since they chose this road, I’m sure they will find their own happiness in the future.”

As a fellow colleague in the industry, Michael Miu expressed his pity for the former super couple. Pointing out that many younger couples have now lost their faith in marriage due to Faye Wong’s divorce, Michael said, “That’s flawed thinking. Many people divorce and get married every day.”

Eddie Cheung said, “Couples should be accommodating to each other. Sometimes it’s not good to let your environment affect you. It’s necessary to take the time to understand each other.”