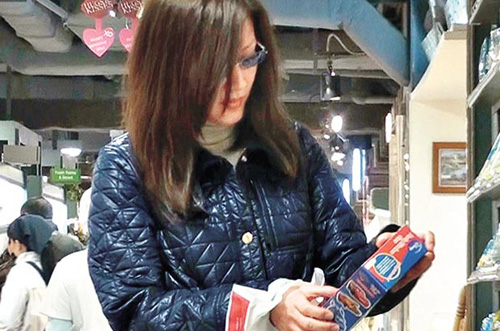 Flora Chan’s (陳慧珊) husband and manager, Mike Chung (鍾家鴻), filed for bankruptcy at the the High Court several days ago. Aside from being extremely frugal on household expenses, Flora had to take care of the living expenses of her husband and their daughter, Mira. After dropping off Mira at her school in her Audi car, Flora was spotted grocery shopping at a supermarket the other day. Due to the financial burden of having to support the entire family, Flora appeared haggard, lacking her past liveliness.

Graduating from Boston University with a degree in Journalism, Flora Chan returned to Hong Kong to pursue a career and was once a top fadan at TVB. Since marrying her second husband, Mike Chung, in 2007 and giving birth to their daughter, Mira, Flora significantly decreased her acting output. Occasionally, Flora filmed commercials, had cameo appearances in mainland dramas, and returned to film TVB series, Suspects In Love <搜下留情> in 2009.  With her husband’s bankruptcy, Flora’s semi-retired and leisurely lifestyle underwent a dramatic shake-up.

Earlier, Mike Chung stressed that his bankruptcy filing did not involve his wife, Flora Chan, and will not affect the lives of his family. However, with Mike’s bankruptcy, Flora naturally became the family’s economic pillar, shouldering immense pressure. In fact, Flora actively accepted numerous jobs to earn more money, while continuing to take her daughter to  Stubbs Road ESF International Kindergarten school and shop for groceries. At 1 PM the day before, Flora Chan wore a quilted jacket, jeans, and no makeup, appearing at a City Super store in Times Square, Causeway Bay. Flora selected fish, frozen meat, pasta, bread and biscuits. For each item that she selected, Flora would first look at the price sticker and then the expiration date, carefully planning her purchases. Staying for only 15 minutes at the supermarket, Flora left in a hurry.

Moving From a Large to Smaller House

Earlier, Flora’s family of three resided in luxury 1,000 square feet apartment, which cost several tens of thousands (HKD) in monthly rent. Due to Mike’s bankruptcy, the family has moved into a smaller establishment. The Audi car that Flora was currently driving was purchased for $290,000 HKD in 2003, under the name of her own company, Talent and Hues Management Limited. Mike did not possess any shares in Flora’s company.

It was rumored that Ricky Wong’s (王維基) City Telecom (CT) was interested in recruiting Flora to film for them. The rumored project resembled TVB series, Triumph in the Skies <衝 上雲霄>. However, Flora still had an outstanding contract with TVB. In a telephone interview, Mike noted, “Actually, we possess the inclination to work [with TVB] again, but the timing did not work out earlier.” Jayne: Flora Chan still has market value, so she should not have trouble finding work. There may be cutbacks required in their lifestyle, but hopefully the bankruptcy will not induce too many disruptions in their lives. In their case, it is fortunate that one spouse still has considerable earning power.