Florinda Ho Blasts Pakho Chau: “You Should Be Ashamed of Yourself!” 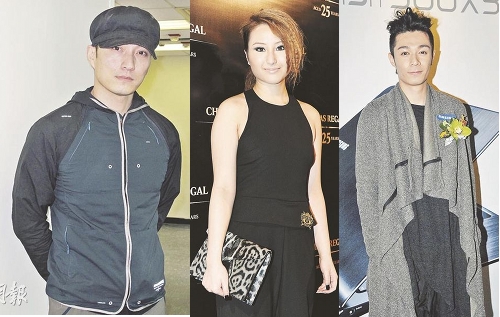 Yesterday, Florinda admitted that she was friends with Joel Chan, drawing a clear boundary with Pakho Chau. Earlier, there were rumors that Florinda celebrated her birthday via a helicopter ride with Joel. In an interview, Pakho said that the man in the helicopter photos resembled Joel Chan. Perhaps Pakho’s statement incurred Florinda’s resentment!

In her blog yesterday, Florinda expressed her anger. She noted that friendships were based on the heart and should not be about using each other for gain.  She asked whether this person felt any guilt and shame? Did the person possess any conscience? Florinda said she drew the line clearly with this person. She did not feel any sense of pity, noting that friends can sit on the sidelines, but should not add insult to injury. Florinda’s severely critical post attracted sympathy from her friends, including past rumored flame, Steven Cheung andHe Jingfeng.

Pakho Chau Did Not Say Joel Chan Rode in Helicopter
Appearing at an event yesterday, reporters confronted Pakho about being the object of Florinda’s wrath. Pakho stressed, “I never said that the person who rode in the helicopter was Joel Chan. I only found out after reading the news. Why would I say that? It must have been a misunderstanding in communication.”

Pakho stated that he would not call Florinda to explain himself, as he did not want the issue to become more complicated.
In her blog, Florinda spoke about “a person who uses his friends.” Reporters asked Pakho whether he was the person Florinda was referring to? Pakho said, “I can not control what others think. I do not want to comment nor respond to whether she misunderstood. If there are additional misunderstandings, the situation will only get worse. I can not explain it.” Pako joked that he talked a lot, but he was not skillful in verbally expressing himself; he was better in written communication.

If Florinda did draw clear boundaries with him, did this make Pakho feel sad? Pakho said, “Can I not comment? Since the onset of initial rumors, we had very little contact. Our general blogging messages were misinterpreted as love exchanges. These rumors were just a misunderstanding.”

Currently, Pakho said he did not have a girlfriend. He said he never thought about pursuing Florinda’s sister,Lourinda [whom he was also rumored with]. Was Pakho afraid of chasing another heiress from the Ho family? “It’s not about fear; I just will not do so!”

Joel Chan Insists He Was Only Friends with Florinda Ho

Receiving Florinda’s support, Joel Chan was approached by reporters on the set of My Cruel Lover <我的如意狼君> yesterday.  During work, Joel dared not exhibit any signs that he was the victor. Was Joel happy that Florinda acknowledged their friendship openly? Joel said, “Recently, many negative rumors have been circulating; how can I be happy?”  Did Florinda’s mother oppose contact between Joel and her daughter? “We are only ordinary friends. I have never met with Mrs. Ho before, so I can not say more.” Joel indicated that he had to repair his mood for work. He noted that he has decreased contact with Florinda. When asked whether Florinda and Pakho reduced contact, Joel said he could not interfere as he did not know Pakho.

Earlier, Joel’s ex-wife, Ponny Yeung, indicated that she felt hurt after their divorce. Joel responded, “I have been busy studying the script for My Cruel Lover and did not have time to pay attention to the news. Now, I just want the incident to pass. My ex-wife does not work in the entertainment industry and should not be harassed. Everything should be directed at me.” 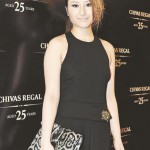 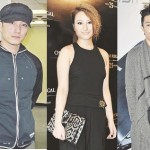 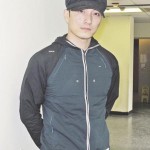 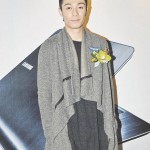 Jayne: Pakho Chau seems to be digging a grave for himself! The more he says, the worse the situation becomes. And this article is from Mingpao, which has a reputation of being a more respectable publication that will not twist artists’ words shamelessly.

If you read between Pakho’s lines, he seems to acknowledge that he believes Florinda’s angry comments were directed at himself. He sounds afraid to talk about the situation further because of angering Florinda more. Will involvement with Florinda drag down Pakho’s rising popularity? Florinda does sound like a fiery heiress, whom people are afraid to cross lines with.

In contrast, Joel is a lot more seasoned in handling reporters’ blunt questions. He skillfully deflected allegations that he was romantically involved with Florinda, disapproval from Mrs. Ho, and even rumors about his ex-wife. He refrained from commenting on Pakho’s rumors, although allegedly, he may have directed some fiery anonymous remarks at Pakho himself in former blog entries.

18 comments to Florinda Ho Blasts Pakho Chau: “You Should Be Ashamed of Yourself!”