Francis Ng: “My Best Scenes Are With Zoe!” 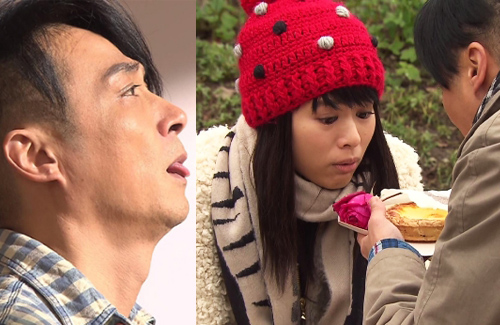 There are some that say Francis Ng (吳鎮宇) has become more solemn and more unwelcome in his pilot role, but Captain Samuel Tong of Triumph in the Skies 2 <衝上雲霄 II> is still as popular with the girls as he was ten years ago.

Francis admitted that although he has been actively promoting Triumph in the Skies 2 around Asia, he did not have the time to watch the final product himself. “I have to get someone to record it for me. I really want to know how different I look compared to ten years ago. I heard from the production crew that some of my scenes from the prequel were added in, and told me that I haven’t changed much. Someone actually told me that I looked too mature for my role in the first installment. Now, I am at the appropriate age.”

In the first few episodes of Triumph in the Skies 2, Sam (Francis) was mourning the death of his wife, Zoe (Myolie Wu 胡杏兒) and spent a few months in England before returning to Hong Kong to join Skylette Airlines. Although Myolie only makes a brief cameo appearance as Zoe in the sequel, Francis believed that Sam’s best scenes in the series were those that involved Zoe.

“It’s strange, but I find that my scenes that involve Zoe to be the best ones. I find the scene where Summer (also portrayed by Myolie) allowed Sam three minutes to speak to her as if I was speaking to Zoe to be very interesting. It was not an easy scene to film, but we completed it smoothly. This is the only scene in the series in which I would love to watch again.

“There was also another scene where it talked about how Sam spent a few years traveling the world before returning to Hong Kong to work as a pilot again. After returning to Hong Kong, Sam stays quietly in his room with a very melancholy expression. Everyone asked how I approached this particular scene, and I told them that because my role has never lived in that room before and he never had the need to socialize and meet that many people when he was in England… I really like that romantic storyline of Sam missing Zoe after she passed away.”

In the 2003 prequel, Sam’s touching relationship with Belle (Flora Chan 陳慧珊) ended when she ultimately chose to be with Vincent (Joe Ma 馬德鐘). Will Sam have a similar tragic fate in Triumph in the Skies 2?

“[Triumph in the Skies 2] starts off as a tragedy. There were people who said I looked miserable with the messy hair, but we wanted the audience to understand how my character was feeling at the time. In the prequel, [my relationship line in] the script was not written out to be that way in the beginning. The crew was also surprised at how [the relationship] turned out. When we were shooting in [Italy], where my character and Flora Chan’s character had their one-night stand, I discovered that there were some changes in our roles. The characters and the actors were all yielding to each other, and in the end… that’s how [our relationship] ended. It was a fun ride.”

Filmed “Triumph in the Skies 2” for His Son

Francis was never fond about making sequels, and confessed that he had considered a long time before agreeing to do it. “I didn’t want to film a sequel. I didn’t even do the Old Time Buddy <難兄難弟> sequel. I never filmed a sequel to any of my projects until now. The audience consistently asked why I didn’t want to shoot Triumph in the Skies 2… but understand that I can’t just film everything that’s given to me.”

Francis continued,”The company’s original plan was to film a youthful (idol) version… but the good thing about filming Triumph in the Skies 2 is that I get to stay in Hong Kong and I’ll have more time to spend with my son. It’s good to see my son watching his father on TV. In the past, my son didn’t have the opportunity to watch me, but now he can. This is something that Triumph in the Skies 2 has given me.”

What would his son do when he sees Francis on TV? “He would imitate me and recite the way how I speak my lines. One time I brought him on set, and he strangely asked us why we were standing around when the airplanes weren’t flying. We rarely have time to see each other. I am always shooting movies and having schedules in mainland China. Filming Triumph in the Skies 2 gave a chance for my son to see how I work.”

“Triumph in the Skies 2” Filming Experience

During the production of Triumph in the Skies 2 last year, Francis opened a Weibo account under the name of his character’s name, Samuel Tong. The account had millions of followers within a week after it opened.

“I wanted to try using Weibo and write messages as my character, to see what others think of him. I would occasionally upload stills from the drama on that account. The account allows me to share the tidbits of my character to fans. Everyone is genuinely interested on what I post. After all, these are fans that have been following the character for many years.”

As for whether or not it is true that Francis had arguments with some members of the production crew, Francis said, “TVB’s producers, directors, and set crews work on drama after drama. There would be confusion. Someone wanted to drag a third person in, and I have always been straight-forward in voicing out my opinions when it comes to TVB. I am quite suitable to be the one who yells. If there is something wrong, I will speak out.”

Although the role “Samuel Tong” brought Francis an extra handful of fangirls, the role did not contribute much to Francis’ career in the business. “I did not get a raise in income nor did I get more performance gigs in mainland China. But I had a great time being him. The first installment was a great success because it had a fresh topic. Even the people now still find the series okay to watch.”

Since Francis loved playing the role so much, would he consider returning to film a third installment ten years later?

“I am open to that idea. If I am offered the role again, and the audience still wants me to do it, then that is an honor. But please, do not rewrite a new love story for me. That may be a bit too hard.”

51 comments to Francis Ng: “My Best Scenes Are With Zoe!”