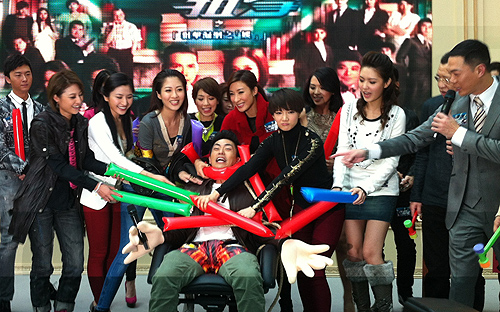 The cast of Friendly Fire <法網狙擊>, had a blast making fun of themselves during a promotional event for the upcoming legal drama, which will be aired on December 18. The Friendly Fire cast, including Michael Tse (謝天華), Tavia Yeung (楊怡), Christine Kuo (苟芸慧), and Patrick Dunn (鄧梓峰), all had their fair share of going through car-shaking rumors in the past few months.

Michael Tse and Christine Kuo were the first to experience the aforementioned scandalous rumors in August, when the tabloids published photos in what appeared to be Christine seducing Michael in a car. The second cast member to experience the car-shaking action was Tavia Yeung, who was caught lying on Him Law’s lap (羅仲謙) while the latter drove her back home from a dinner party in September. The final victim was Patrick Dunn, who was maliciously and falsely claimed to be cheating on his wife with his Highs and Lows <雷霆掃毒> costar, Elaine Ng (吳綺莉) in November.

Although their reputations were threatened at the time the scandals took place, the car-shaking victims had no qualms in admitting that the claims were actually quite hilarious. They were more than happy to bring out the rumors again to help promote the drama. Other cast members at the Friendly Fire promotional event brought out a blown-up version of a pseudo magazine cover that read “Michael Tse and Christine Kuo Caught Car-shaking in the Middle of the Night,” and later requested for Michael and Christine to pose behind a cardboard cutout of a cartoon car.

Upon the request, Michael immediately grabbed costar Patrick and cried, “Don’t go away! You are also part of this mess!” Tavia immediately backed away before Michael and Patrick could drag her to take a picture as well.

At the promotional event, the organizers prepared oversized white gloves for Sammy to wear, and asked Sammy and Sharon to reenact the chest-touching scene again. When Sammy brushed his hands over Sharon’s chest, he said, “I thought I would be touching a wall, but it turns out that I am actually touching a washboard.”

Sharon exclaimed, “What? No! It is bumpy!”

Tavia immediately came to Sharon’s aid and decided to test Sharon’s chest herself. Before Tavia could come up with a nice comeback, Sammy cried, “Of course washboards would help other washboards!”

With only a few days away from the 2012 TVB Anniversary Awards, Best Actor nominee, Michael, revealed that he already voted. “When I was working with Kate Tsui (徐子珊) last night for a Lunar New Year film, she could not stop nagging me about the awards! I had no choice but to vote for her!”

What about his Friendly Fire costar, Tavia? “I am a fair person, so I told my wife to vote for Tavia. I support both of them,” said Michael.

As for the Best Actor award, Michael expressed that he believed Raymond Lam (林峯) has a big chance to win due to his large fan base. On the other hand, Alice Chan (陳煒), who also stars in Friendly Fire, said, “I voted for Wayne Lai (黎耀祥) and Tavia.” What’s wrong with Raymond Lam? Alice giggled, “He’s not my type. I prefer Wayne Lai’s acting!”

Tavia, who recently won Best Actress at Malaysia’s My Astro on Demand Favorites Awards, was asked if she felt more confident in winning this year’s TVB Anniversary Awards. Tavia quickly explained, “The awards are not very organized for openness and transparency. No one knows what would happen until the last minute. There are many factors to winning and losing. I don’t think that a large fan base would guarantee more votes for the person.”