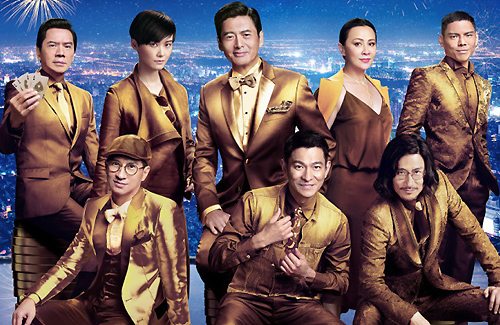 This prompted numerous Hong Kong netizens to express their unhappiness with Wong Jing’s views, with some of them even instigating a movement to boycott the film. In response, Wong Jing countered that the total box office sales in Hong Kong for From Vegas to Macau 3 was only one-twenty-fifth of the box office sales in Mainland China, and was thus not worried at all about the potential boycotting.

In any case, the Hong Kong fans did not actually deliver on their threat to boycott the film. The film opened on February 6, but various major cinemas started accepting ticket pre-orders on February 2. While the number of people who pre-ordered tickets was relatively small, the moment the film premiered, its box office was sold out across the city. From Vegas to Macau 3 did so well that it topped the box office on its opening day, beating other popular films like Pixar’s The Good Dinosaur, and Alvin and the Chipmunks 4, raking in about $346,500  USD in box office sales on a single day. To-date, the film has earned a total of approximately $657,000 USD in box office sales. Tickets to From Vegas to Macau 3 have been so in-demand that it has virtually been impossible to get a ticket for the film this week.

The film’s box office performance in Mainland China has been even more impressive. The film earned approximately $19.2 million USD in box office sales on its opening day.