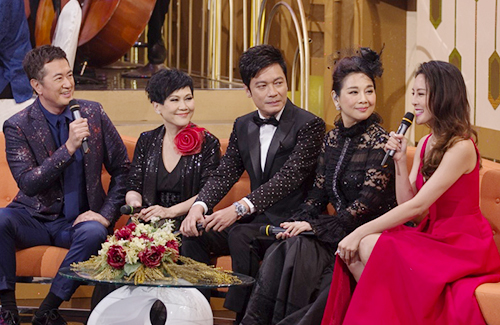 In a backstage interview, Gallen revealed that he had returned to Beijing after completing the shooting of his latest TVB drama, The Conspirators <與諜同謀>. However, he only stayed in Beijing for a week, as he had to return to Hong Kong to film a web series with Him Law <羅仲謙>. The drama is a very loose adaptation of the 2002 film Infernal Affairs <無間道>, with Gallen starring as the main villain.

When speaking about his daughter in Beijing, Gallen said, “She does miss me, but she would also tell me to enjoy filming. I will be a guest performer at Jimmy Lo’s (盧國沾) upcoming concert, and my wife and daughter plan to come to Hong Kong to support me.”

Adia, on the other hand, shared that production for her TVB drama Full-Time Nowhere Woman <全職沒女> still has one week left. She stars in the comedy drama with Eddie Cheung (張兆輝).

The 45-year-old said she’s already missing the cast, and will cherish the memories she had with them. “I hope we’ll have more opportunities to meet up in the future!”

After completing Nowhere Woman, Adia will continue to travel around Mainland China to do mini stage performances, as well as star in reality TV programs. When speaking about her TV appearance with Gallen, who she hasn’t collaborated in a drama with since 1996’s Cold Blood Warm Heart <天地男兒>, Adia said, “If I knew he’d be here, I would have definitely asked to sing a duet with him!”