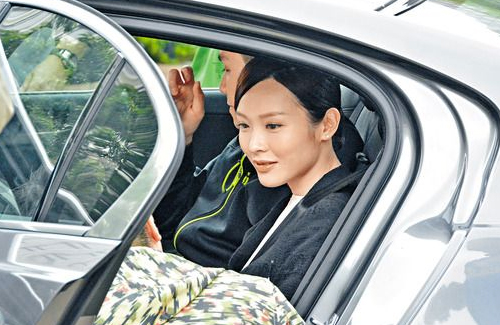 Filming for The Conspirators <與諜同謀> has begun. On March 8, main cast members Gallen Lo (羅嘉良) and Ali Lee (李佳芯) showed up on the set of the TVB drama in Tsim Sha Tsui, where they shot a scene inside a car. Ali, who said the show would be her first collaboration with Gallen, appeared very nervous in front of the veteran actor.

The Conspirators is Gallen’s first TVB drama since 2009’s Born Rich <富貴門>. Ali, who stars as the female lead, said she feels quite surreal to be working alongside the award-winning actor. The Fashion War <潮流教主> actress said, “I remember I religiously watched all the episodes of At the Threshold of an Era <創世紀>. I love [Gallen’s] singing voice, and when I was told that I’d be working with him, ‘Let Me Stay’ <准我留下> [At the Threshold of an Era theme song] was on constant loop in my head. I really hope to hear him sing it live.”

As Ali had only completed the filming of Law dis-Order <律政強人> a few days prior, she struggled to get into character for her role in The Conspirators. Fortunately, Ali said Gallen was very patient and kind to her, helping her comfortably ease into her role.

In regards to working with Ali, Gallen was all praises for the rookie actress. “She’s very steady, comfortable to work with, and has a great sense of humor.” When told that Ali would like to hear him sing, he laughed, “We can all get together for karaoke after we’re done with the show!”

Law dis-Order’s Alex Fong Chung-sun (方中信) groaned at TVB’s tight filming schedules and said he probably wouldn’t be filming any TVB dramas for the next ten years. Gallen said, “The producer would try his best to take care of all of us. We do get to rest. I understand why the filming schedules have to be tight. We all need to make accommodations.”