Gigi Lai and Michelle Reis Both Pregnant With Their Second Child 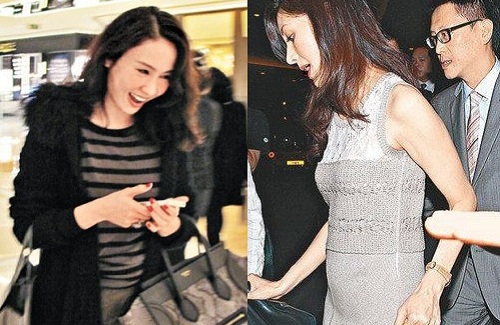 Retired Hong Kong actresses, 40-year-old Gigi Lai (黎姿) and 41-year-old Michelle Reis (李嘉欣), had several things in common. Gigi had once dated Michelle’s husband, Julian Hui (许晋亨), many years ago. Both women found love and got married in 2008 to influential, powerful men, cementing their elite statuses in Hong Kong society. It was understood that Gigi and Michelle were both in the early stages of pregnancy at this time!

Gigi Lai gave birth to a set of premature twin daughters in July 2010. The girls were conceived via in-vitro fertilization. Carrying twins caused Gigi to balloon up to 180 pounds. According to Next Magazine, Gigi’s husband, Patrick Ma (馬廷強), was concerned about Gigi’s safety and did not want her to become pregnant again. However, Gigi wanted to give her husband a son, thus successfully conceived again via in-vitro fertilization recently.

Patrick was reportedly so happy with Gigi’s second pregnancy that he was eager to buy a new house for Gigi! The couple was spotted scouting a $100 million HKD luxury home together.

Gigi’s friend, who spoke on the condition of anonymity, stated that Gigi appeared to have gained weight at a social gathering last month. “After one month of not seeing Gigi, she gained obvious weight. She intentionally did not wish to remove her jacket. We teased her as to whether she was pregnant. She smiled and did not reply. Afterward, we realized that she was pregnant!”

Since Michelle Reis gave birth to her son, Jayden Max Hui, in February 2011, she was often asked when she intended to have another baby. As early as January 2012, Michelle was rumored to be carrying a “Dragon Girl.” The former actress continued to deny pregnancy rumors despite being spotted with a noticeable baby bump on March 18th. Going out to dinner with husband, Julian Hui, Michelle wore a tight-fitting grew dress which revealed her baby bump.

When asked if she was pregnant, Michelle smiled and said no. Supported by her husband, Michelle dodged press questions. Perhaps Michelle did not wish to admit that she was pregnant until the passing of the first trimester of pregnancy, after the fetus’ condition was stabilized.

Jayne: Congratulations to Gigi and Michelle! I have a feeling that both pregnancy rumors are true!