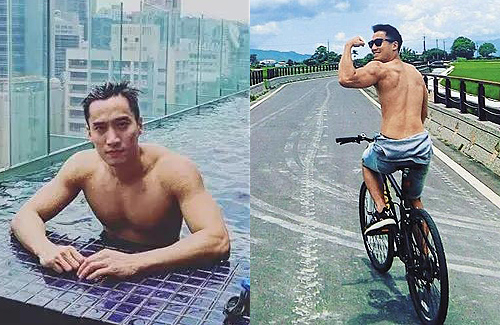 Graduating from Fu Jen Catholic University’s Department of Medicine in Taiwan, Michael practiced as an obstetrics and gynecology physician at a hospital. In recent years, he has moved to clinical practice, specializing in cosmetic gynecology. Michael’s clients are primarily postpartum women who are looking to enhance the aesthetics and performance of their genital parts, as well as older women who are experiencing menopausal discomfort and urinary incontinence.

The handsome and talented doctor was also a guest on Taiwanese show Kangsi Coming <康熙來了> earlier. Charmed by Michael, host Dee Hsu (徐熙娣) even said that she hoped he can be her obstetrician when she was ready to give birth.

Michael is well aware of his own charms. He frequents the gym and flaunts topless photos of himself on his social media account, which has a following of more than 10,000 people. In 2016, Michael was married to online apparel entrepreneur, Ivy Chao, for six months. Shortly after his divorce, Michael started dating Gillian. Michael said Gillian had a good heart and felt that they had a future together.

While Michael gave off a flirtatious impression and is surrounded by many female friends, Gillian’s fans hoped that she will find lasting happiness in her upcoming marriage.