Experiencing explosive popularity with his performance in BL drama Word of Honor <山河令>, Chinese actor Simon Gong Jun (龚俊) is quickly becoming one of the hottest new stars of 2021. While some artistes can turn pompous by sudden fame, Gong Jun remains humble as he still considers himself among the “18th tier” of celebrities. Sitting down for an interview, Gong Jun sheds light on his real self compared to his character.

Playing the master of the Ghost Pavilion Wen Kexing, Gong Jun has been stealing hearts with his charismatic and flirty performance. As to when he fully grasped an understanding of the role, the 28-year-old expressed that reading the entire script finally allowed him a sense of how to portray Kexing. “I previously played many simple and pure characters, so it took a while to craft such a multidimensional performance. It’s actually quite exhilarating, to play the ruthless one.”

Asked how he rates his own performance, the 28-year-old said, “I give myself a 75, with another 25 points for improvement. At this time, I feel that I’ve done my best.”

On whether he shares any similarities to his onscreen persona, Gong Jun said, “I grew up in a relatively warm family, so my background is completely opposite to Kexing. Losing his parents at a young age, he must have struggled immensely by climbing to the top by himself. Because of such tough circumstances, it was actually quite challenging to play this role.” 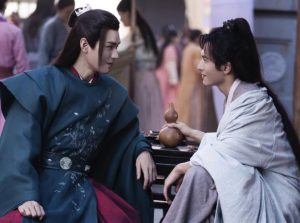 In Word of Honor, the complex mindset of Kexing is grounded by the reserved Zhou Zishu (Zhang Zhehan 張哲瀚), who is essentially the only “light” for which Kexing will forever pursue. On this aspect, Gong Jun was asked if he has his own “light,” to which he answered, “My light right now is my career. I hope to continue moving forward because I often feel anxious when I am out of work. It makes me doubt myself on whether I am suited to work as an actor.”

Despite moments of uncertainty, Gong Jun digests these kinds of negative feelings fairly quickly due to his cheerful personality. Considering himself to be lucky enough to reach this stage, he is grateful for fans’ love and has been actively sharing his moments of happiness. Looking forward, he hopes to achieve more breakthroughs in acting.

Original Cast for “Word of Honor”