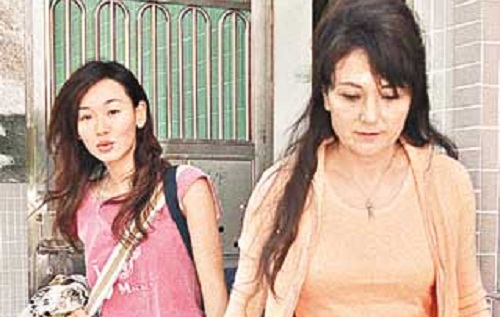 In an interview yesterday, Gregory Lee’s (李泳豪) mother, Shih Ming (施明), sighed that she felt helpless against Shirley Yeung’s (楊思琦) accusations against the Lee family. According to Hong Kong’s Oriental Daily, Shih Ming, who had all along viewed Shirley as her prospective daughter-in-law, felt wronged and helpless regarding Shirley’s accusations that Shih Ming had treated her as transparent and made her feel unwelcome. As a devout Buddhist, Shih Ming decided to draft a letter of four word Buddhist teachings to Shirley to relieve the knot in her heart and to give her ex-prospective “daughter-in-law” a last piece of advice.

During the interview, Shih Ming expressed that she had known Shirley for nine years and treated Shirley like her own daughter. Shih Ming said that she can live with her own conscience and did not let Heaven and Earth down (对得起天地良心).

Shih Ming continued, “I dote and treat even the dogs in my home really well, not least to say in regards to a human? Shirley kept saying that she’ was close to her dogs however, on the day that she left, she did not even care one bit about them. Shirley did not even drop by to visit them and there was not even a single text message or call from her, indicating that she wanted the dogs back. Despite that, we have, as usual, been actively taking care of her dogs.”

The following is Shih Ming’s letter of Buddhist teachings as a form of final advice to Shirley:

Shirley, How are you? For your own good,

Please sit properly, Use your heart and listen properly.

Plenty of money, few money,  As long as there’s enough to feed, it is good enough.

Looking ugly or pretty, as long as the heart is “pretty”, it is good enough.

Being old or young, as long as the health is excellent, it is good enough.

Poor family, rich family, as long as there’s harmony, it is good enough.

The spirit of getting along as husband and wife, as long as there’s mutual respect, it is good enough.

Husband returning home late, as long as he cares for the family, it is good enough.

Wife being naggy, as long as she’s a devoteful wife, it is good enough.

A child, has to be taught from young,

Whether it’s a professor or a tea pouring attendant,

As long as the heart is ugly and evil, Good to no good,

Instead of pressing on, putting it down will be the best.

With a good heart and good actions, life will then change for the better.

While writing this letter, Shih Ming was so distraught that she accidentally wrote Shirley’s Chinese name incorrectly, writing “思其” instead of “思琦.”

The newspaper also extracted this paragraph from Shih Ming’s letter, “As long as the heart is ugly and evil, Good to no good, Who’s right or who’s wrong, As long as heaven knows, it’s good enough.” and analyzed it as Shih Ming seemingly hinting something in her usage of these words. Ah K: For those who are interested to view the original letter (which is written in Chinese), kindly refer to the the link above please!