Him Law an Attentive Boyfriend to Tavia Yeung? 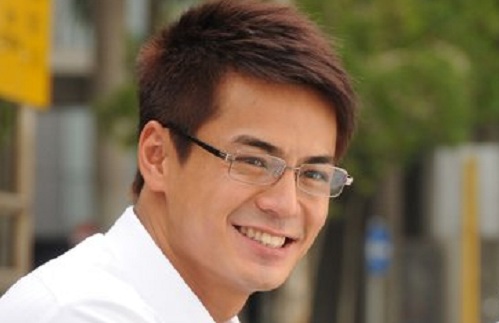 When Him filmed a wedding ad opposite JJ Jia in June, she clung closely and chattered with him. The director originally anticipated that it will require 3 takes to film the kissing scene. Before the crew was ready to roll the cameras, JJ had thrust her face close to Him. She was teased for being “over eager” to get intimate with her hunky costar!

JJ laughed, “Oh, I did not hear the directions clearly!” JJ also requested the kissing scene to be re-shot, claiming that her hair was messy in the first take!

During filming breaks, JJ chatted with Him heartily and toyed with his glasses. While filming Tiger Cubs <飛虎>and L’Escargot <缺宅男女>, JJ had allegedly “glued” herself by Him’s side as well. Was Him simply irresistible to women? Or was JJ friendly with Him because he was good friends with JJ’s rumored boyfriend of 2 years, Sammy Shum (沈震軒)?

Him Law an Attentive Boyfriend

Despite JJ’s attention towards Him, he apparently did not respond to her flirtatious manner. It was understood that Him has been an attentive boyfriend to Tavia Yeung. Aside from earlier rumors that claimed that Him was currently living at Tavia’s condo apartment for 6 months, Him allegedly delivered meals to Tavia in his free time.

An inside source stated, “Him is very protective of this relationship. Tavia has been filming Justice Attack <法網狙擊> until dawn. In the middle of the night, Him especially drove to TVB City to deliver dessert and herbal teas for her. He also waited inside the studio for several hours to wait for Tavia to complete her filming before driving her home.”

Him allegedly rejected intimate film roles due to dating Tavia. The inside source said, “Earlier, Fat Wilson (Director Wilson Chin 錢國偉) wanted to cast Him in a sex-oriented film, but Him protested with his management company. Unless it was absolutely necessary, Him did not wish to take on intimate scenes. This was apparently a gesture to boost Tavia’s confidence in him.”

This year may be considered as a breakout year for Him. Him’s role in The Hippocratic Crush < On Call 36小時> and dating rumors with Tavia Yeung have earned him a regular spot in weekly tabloids. Him Law is heavily promoted by TVB and will have a prominent role in the upcoming Triumph in the Skies 2 <衝上雲霄 2>.

Jayne: Him does have an easy charm about him. He has a lot of friends at TVB and the company is promoting him like its own “biological son”! I predict that Him will win the Most Improved Actor Award this year!

34 comments to Him Law an Attentive Boyfriend to Tavia Yeung?