Him Law Exercises Caution on Set; Has Isolated Meals 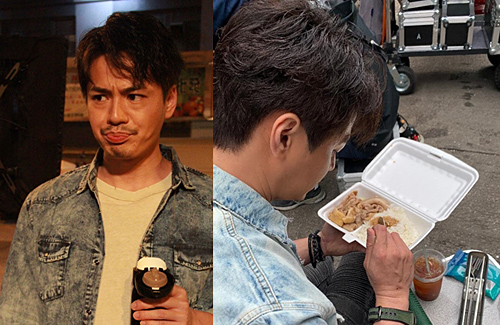 The daddy-to-be pulls out all stops to keep himself healthy and virus-free.

In mid-February, 40-year-old actress Tavia Yeung (楊怡) announced her pregnancy on social media, revealing that her due date will be in May. Preparing himself to welcome their first child, husband Him Law (羅仲謙) has been stressed out as he commences filming for upcoming TVB drama Armed Reaction 2020 <陀槍師姐2020> amid the coronavirus pandemic.

Last Saturday, Him and the cast headed to a drinking house in To Kwa Wan for an outdoor scene, with over 10 cast and crew members squeezed into a confined space of a few hundred feet. The scene also required co-star Gloria Tang (鄧佩儀) to massage Him’s shoulders, feed him fish balls and push his forehead, with the two delivering the script lines close to each other.

With Tavia due in two months, Him has taken all possible precautions on set. His female assistant was close by and prepared with alcohol sanitizers, wipes, masks, and the actor’s own cutlery set and a thermal flask to keep him throat moist.

He explains, “It’s worrying since I’ve to be out the entire day filming, and can’t put on a mask while at work. Before I return home, I would disinfect myself and go bathe and wash my clothes once I get back, take more health supplements for better immunity, and also prepare my own bowls and utensils to have meals away from the team. I’d rather have the takeaway food for cast members than eat in restaurants,”

While Him shared that he quit having cold beverages to avoid irritating his throat, and would drink warm water instead, reporters found him secretly enjoying a cold drink. The paranoid actor admitted that he would stress out even with the slightest flu or cold symptoms, and had once panicked after waking up with a dry throat. Luckily, his worries were unfounded.

As for having to work at close contact with Gloria on set, Him shared, “I trust her and she trusts me; each one of us does our part. The company is more aware of health now and would measure our temperatures before work.” Gloria concurred, saying, “The props we use have been cleaned in bleach. Even the bowl of curry fish balls have been cooked at high temperature. I want to give my co-star peace of mind and would ensure my personal hygiene!”

Him, who puts on a mask even while going to the gym, said that he and Tavia would sleep in separate rooms when he has the slightest cough. He has even made plans to stay in a hotel in Tseung Kwan O should there be a need. While he has no kissing scenes, Tavia was more worried about Him’s fighting scenes. “Some action scenes require me to fight until I land on the ground, as things are different now. If I can’t do it, I’d get a body double.”

The actor has also started fetal education, talking to the baby, reading the story of The Three Little Pigs and playing children’s songs. As the newborn would be the first grandchild on his side of the family, Him shared that the elders would be the one to pick out a name. When prompted by reporters if the child would be the eldest grandson, Him had a slip of the tongue and seemingly revealed the child’s female gender.

Originally intending to cut the umbilical cord himself, the daddy-to-be would not be able to enter the labor ward now due to the coronavirus situation.

Sharing about Tavia’s pregnancy, Him said that she has not experienced much discomfort though she has a greatly increased appetite. “When I get home in the evening, I’d prepare supper for her so we won’t have to head out. As pregnant women need to sleep on the side, she hasn’t been sleeping too well and would feel related aches and pain in her bones, so I’d help her massage her neck and legs to ease the discomfort.”

1 comment to Him Law Exercises Caution on Set; Has Isolated Meals