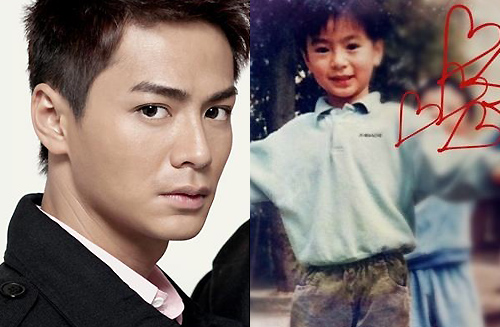 Him Law’s (羅仲謙) image suffered a heavy blow after Theresa Fu (傅穎) revealed the bruises she incurred in their physical quarrel last year. The success of Him’s TVB dramas, The Hippocratic Crush <On Call 36小時> and Tiger Cubs <飛虎>, has salvaged his negative public image to a significant extent. Him’s alleged romance with 32-year-old Tavia Yeung (楊怡), who has a clean image, also appeared to have aided in his image recovery. Recently, tabloids claimed that Him fell in love with Tavia because she resembled his own mother.

Him Law has been doing well in keeping his family history from getting exposed to the public. East Week reported that Him’s parents were teenage sweethearts. Him’s mother, who worked in a garment factory, was known for her beauty. Her coworkers and neighbors nicknamed her “Tai Po’s Factory Flower.” Him’s father worked as a hair stylist.

At only 19 years old, Him’s father reportedly married his mother after an unplanned pregnancy. Him’s mother gave birth to his older sister when she was 16 years old. Him was born two years later. A friend of Him’s family revealed that Him’s father had an explosive temper, and often had arguments with his mother. She finally left the Law family in 1992 after a dramatic divorce. Him and his sister then moved to a walled village in the Tai Po District to live with their father and uncle.

Due to work obligations, Him’s father was not around often, and Him and his sister were primarily raised by their uncle. Him once said, “My uncle is very responsible. Although he never married nor had kids, he would still take care of my father and his family. His enthusiasm has influenced me too, so I would also get concerned when my sister brings a boyfriend home.”

In 1996, Him’s mother married a chef, who opened a Hong Kong style-café in Tsuen Wan. The couple had a son a few years later. Him’s father, now 49-years-old, recently married a mainland Chinese woman who is 20 years his junior. Their son is currently one- and-a-half years old. .

Judging from Him Law’s past rumored girlfriends, his romance with the older Tavia Yeung came as a surprise. Could it be that Tavia’s close resemblance to his mother that gave Him a sense of family security, which he had lacked for the past 20 years?

At the costume fitting for A Great Way to Care 2 <仁心解碼>, Tavia denied that she resembled Him’s mother. Tavia exclaimed, “Mommy Law is very pretty and young! We don’t look alike at all!”