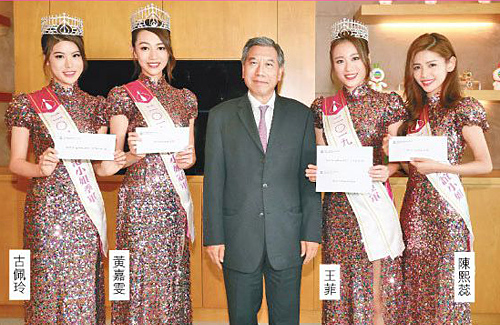 It has been two days since 2019 Miss Hong Kong winners Carmaney Wong (黃嘉雯), Fei Wong (王菲) and Kelly Gu (古佩玲) were crowned. The winners along with Miss Friendship winner Blossom Chan (陳熙蕊) appeared at TVB station yesterday, and each shared their feelings about their victories and how they had celebrated their achievements.

Carmaney revealed that she arrived home in the early morning and celebrated with the family by having champagne and midnight snacks. She also felt ill after the competition, “I felt a little sick. My head hurts and I only slept for four hours last night. There’s not enough time to rest, so I’ll finish work early today and head home to rest.”

When asked if she will celebrate with her boyfriend from Switzerland, Carmaney responded she doesn’t know yet. She then added that he has work and is in the marketing industry. He came to support Carmaney during the night of the competition, and later messaged her saying he was proud of her performance.

In a stable relationship, Carmaney was questioned if she feared the “breakup curse” that eventually faced most Miss Hong Kong winners. The 25-year-old replied, “No, he’s very open. Besides, we’re both mature adults, so I’m very confident that he’ll understand and support me. We’ve also been together for a few years now, so we’re very free and comfortable.”

The youngest contestant, Kelly, is also dating and shyly revealed that her boyfriend is in Canada. He messaged her congratulations after her victory.