Hu Ge Brought Girlfriend to Wallace Huo’s Wedding; Will He Be Next? 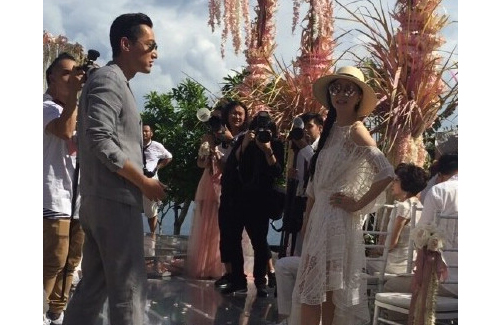 According to the Taiwanese media, Hu Ge had brought his girlfriend, Lin Xiao (林晓), along with him to Wallace and Ruby Lin’s (林心如) wedding in Bali last month. The couple kept their distance at the wedding, and paparazzi didn’t realize they were there until Hu Ge and Lin Xiao were photographed in Bali’s Ngurah Rai International Airport on the same day, though at different times.

Their appearance at the wedding has gotten netizens to wonder whether or not Hu Ge will be the next person to leave the singles market.

Hu Ge admitted to dating Lin Xiao, a non-celebrity, in January earlier this year. Lin Xiao, who is from Shandong, was trained at the Beijing Dance Academy and came from a wealthy background. Her mother is an associate professor at a renowned hospital, and her father is a real estate businessman. It has been said that Lin Xiao originally wanted to pursue an acting career, but gave up on that dream due to her parents’ objections.

3 comments to Hu Ge Brought Girlfriend to Wallace Huo’s Wedding; Will He Be Next?