“I Have a Date with Spring” Successfully Ends Tour in Shanghai 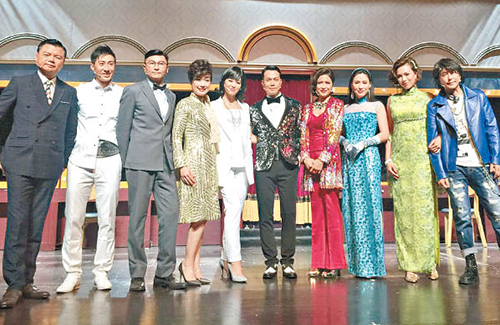 The popular Hong Kong stage play I Have a Date with Spring <我和春天有個約會> successfully ended its five-day run in Shanghai on September 18, 2016.

The famous stage play, which had its first show on the Shanghai Oriental Art Center on September 14, starred Myolie Wu (胡杏兒), Jade Leung (梁琤), Elena Kong (江美儀), and Maggie Shiu (邵美琪) as four nightclub performers whose lives were forever changed after one of the performers was given an opportunity to perform one final show for a nightclub, on the night of the Hong Kong 1967 Leftist Riots.

Queenie, who portrays the sexy Yuen Pik, had on a pair of fake silicone breasts to enhance her figure. The former beauty queen contestant had a lot of fun portraying the character, and is very satisfied with her exaggerated appearance on the show.

She said, “For the sake of the stage, I don’t mind playing these characters. But many of my friends had a great laugh when they saw my appearance. It’s just all for show, guys!”

Queenie thanked her costars for taking care of her, saying, “They know I’m carrying a lot of weight. I have to wear these fake things on my for the entire day. They’d watch out for me, telling me to sit down whenever I could to take a rest. They’d also give me a hot water bag for my back.”

As Michael will soon start training for his other musical The Storm Show <風雲5D音樂劇>, he said I Have a Date with Spring had been a great warm-up show for him. Myolie has also gotten much more confident in her singing compared to her performances in the Chinese music program, King Cross <跨界歌王>.

Myolie has recently been rumored to be “preparing” for a baby, as gossip reports have said that her husband Philip Lee (李乘德) has moved to a new home in Tai Po. In regards to this rumor, Myolie said, “It’s true that we’ve moved houses but it’s not because we’re preparing for a baby.” Admitting that she wants to have a child, Myolie added, “I still have to complete all my jobs at hand before I think about anything else.”

There has also been rumors that the organizers purposely changed rehearsal location from Shanghai to Hong Kong in order to accommodate Myolie. The former TVB actress said, “Rehearsing has always been in Hong Kong. I’ve never requested anything.”

I Have a Date with Spring, a stage play written by Raymond To (杜國威), first premiered at the Hong Kong City Hall in 1992. It was adapted into a Hong Kong film in 1994, followed by an ATV television drama starring Sheren Tang (鄧萃雯), Joey Meng (萬綺雯), and Kwong Wa (江華) in 1996. A loose Chinese adaptation, the television drama Love in Spring <愛在春天>, was released in 2013.

TAGS: I Have a Date with Spring, Michael Tse, Myolie Wu