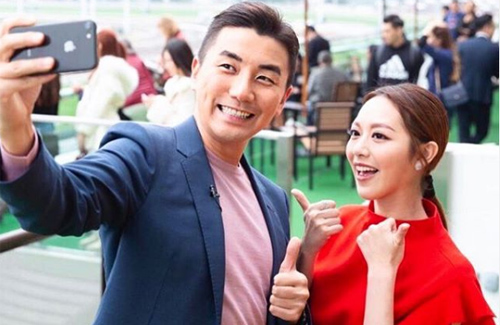 Reflecting on their accomplishments in 2019, both Tony Hung (洪永城) and Crystal Fung (馮盈盈) had consistent work and their careers were fairly smooth sailing.  The series they starred in respectively, Wonder Woman <多功能老婆> and The Man Who Kills Troubles <解決師>, garnered positive attention. Both artistes look forward to more growth in the new year.

Feeling thankful, Tony said, “Actually, I could have worked even harder and should have taken more initiative to pursue job opportunities. I hope this year will be even better. Both Handmaidens United <丫鬟大聯盟> and Of Greed and Ants <黃金有罪> are airing in the new year.”

Since last year, Tony began writing prose again and began practicing calligraphy. Hoping to put his thoughts into words, Tony’s goal is to release a book in the new year.

Tony expressed, “I really like the book Thinking, Fast and Slow. The book teaches us to have a better understanding on the rhythm of thinking and how to find a good middle ground. I’m definitely someone who is slow. Although I do want to be more impulsive, I know that making decisions as an adult requires a lot of thinking. That’s why I miss thinking as a child.”

Crystal on the other hand, hopes to further advance her acting career. Thinking back to her accomplishments last year, Crystal said, “I was happy to get the Most Improved Actress award in 2018 and this year, I’ve reflected on my short-comings as well. After having finished filming Al Cappuccino <反黑路人甲> with Vincent Wong (王浩信) earlier, I realized I’ve already completed three to four dramas. In terms of hosting work, I’ve gone from being an amateur to being experienced – I’m a senior now and I feel like it’s time that I start sharing my experience with other people. This feels like a new mission to me.”

Although Crystal understands that she is a favorite among netizens, the actress also recognizes her biggest short-coming – enunciation. Despite being a host and actress, Crystal is prone to not enunciating her words clearly. Learning to speak slower and clearer, the actress said she is working hard to get her bad habits fixed.

Rebecca Zhu Complains that Tony Hung is Too Touchy