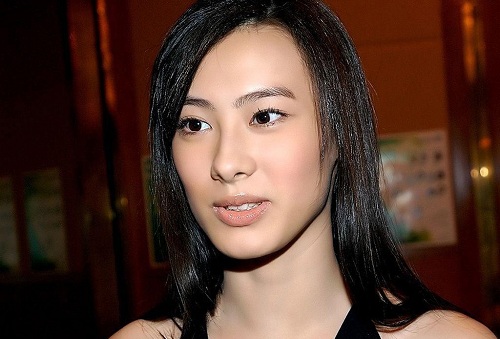 A few days ago, Isabella Leong (梁洛施) was spotted with a new boyfriend in Paris. It has been more than a year since Isabella shockingly broke up with Richard Li (李澤楷), the younger son of Hong Kong’s richest man Li Ka Shing (李嘉誠). Rumors claimed that Isabella has been dating her new boyfriend since March of this year.

Isabella Leong and Richard Li’s romance had captured the imagination of Hong Kong while it lasted. Despite the promise of a modern “Cinderella” story, the relationship ended in heartbreak one and a half years ago. The pair never got married despite having three sons together.

The 24-year-old former EEG singer and film actress was recently found to be romantically active again. A netizen revealed on Twitter that she spotted Isabella in Paris on June 27th. Isabella was in a brand-name shoe shop while accompanied by a trendily-dressed handsome man.

In the netizen’s uploaded photo, Isabella was wearing a blue dress with a short attached skirt, which showed her long legs. Isabella was very low profile and easy going on that day. She and the man browsed around in the men’s shoes area for a long time. A salesperson recommended the latest handbags to Isabella and she responded positively to the staff member’s recommendations.

In fact, earlier in March, Isabella was also seen at the Musée du Louvre in Paris with a man. The person who spotted the pair also uploaded a photo onto the Internet. Although the museum and shopping photos did not reveal the man’s face, it was believed that the two photos featured the same man.

In addition, other eye witness accounts note that Isabella has been spending time in Paris over the last few months. She was spotted at the Arc de Triomphe, the Eiffel Tower, and even an open sidewalk café. People who have seen her appear to have a positive impression of her. They praised her for her friendliness. One fan wrote, “We saw Isabella Leong when we went to a café to have a cup of coffee. She was very pretty! It is pity that she refused to take a photo with us.”

Regarding speculations that the man in the fan photos was Isabella’s new boyfriend, her spokesperson said that she was currently away from Hong Kong and could not comment until she has read the reports.

14 comments to Isabella Leong Spotted with Mysterious Lover in Paris