Jacky Cheung Reveals Why He Stopped Working with Wong Kar-wai 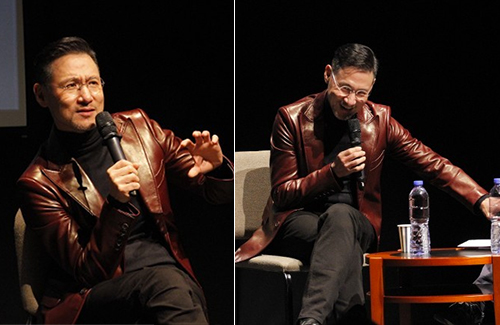 On March 29, The Hong Kong Academy for Performing Arts hosted a forum featuring Jacky Cheung (張學友). At the forum, Jacky talked about his 30-year career as a film actor, sharing tidbits about his professional life behind the big screen.

The 54-year-old actor and singer, who shot his first movie in 1986, said film had profoundly impacted his life. Not only did film introduce Jacky to his wife May Lo (羅美薇), film also introduced Jacky to Wong Kar-wai (王家衛), one of the most difficult directors he had to work with.

“If you take everything seriously like it’s real, there’s going to be some loose ends you have to tie,” said Jacky. “I learned this the hard way. I was clueless when I did my first film, thinking that everything has to be real. In the end, my actions affected my life. I really fell in love. Now, regardless of how many times I kiss my costar, I know everything would end when the movie ends, but I didn’t know how to control that at the time.”

Devoted to You <痴心的我>, one of Jacky’s first movies, costarred his wife May Lo. Unable to get out of character, Jacky fell in love with May in real life. The couple tied the knot in 1996, after ten years of dating. They now have two daughters, born in 2000 and 2005.

Jacky admitted that his daughters were the reason why he decided to reduce his work output, and said, “I’m 50 years old now. I really want to realistically experience each and every stage of my life. I don’t want to leave myself out of the loop all the time.”

On Working with Wong Kar-wai

Wong Kar-wai was another individual who had deeply impacted Jacky’s life and film career. They collaborated in three films, including As Tears Go By <旺角卡門>, Days of Being Wild <阿飛正傳>, and Ashes of Time <東邪西毒>.

Jacky shared, “In Days, there was this one simple scene where I had to look up from the floor. That simple expression took over 60 takes. After doing it over 60 times, Wong Kar-wei said ‘whatever, that’s enough’ and walked way. That got me feeling really uncomfortable. If our relationship was strictly director and actor, then I’d understand, but we were friends. I didn’t understand why he treated me like that. At least tell me which take you’re going to use, or which take didn’t work!”

Jacky then added, “It was then when I started to realize how suffocating it was to be an actor. I wanted to perform, but what would be good? Film is a collaboration between directors, actors, cameramen, lighting… it’s a group effort. If I don’t know what I’m doing wrong, I’d feel helpless. This is why I eventually stopped working with director Wong Kar-wai.” Jacky said Ashes of Time was probably his last collaboration with the director.

Critics say Jacky’s performances in As Tears Go By and Days of Being Wild reminded them of Robert DeNiro in the 1973 film Mean Streets, and that it was possible that Wong Kar-wai had drawn inspiration from Robert DeNiro’s role in the crime film. Jacky said that he did not watch any of Robert DeNiro’s works prior to filming those movies, but expressed, “Robert DeNiro is a very respected actor in this industry. Thanks for thinking so highly of me.”

When speaking about Jacky’s critical success in the film industry, the forum showed some clips from 1990’s Bullet in the Head <喋血街頭> and The Swordsman <笑傲江湖>, both which earned him nominations at major film award ceremonies. Bullet in the Head gave Jacky his first HKFA Best Actor nom, while The Swordsman gave him his first Best Supporting Actor win at the Golden Horse Awards.

“I did pretty well!” remarked Jacky as he watched a short clip from Bullet in the Head. “If I couldn’t even win [Best Actor] for that, I don’t think I’d ever will!” As for The Swordsman, Jacky said, “I don’t even know why I won for that role.” Jacky teared up when the forum showed a clip of him and his late friend, Anita Mui (梅豔芳) in the 2002 film July Rhapsody <男人四十>. The movie was Anita’s final film appearance before passing away from cervical cancer in 2003.