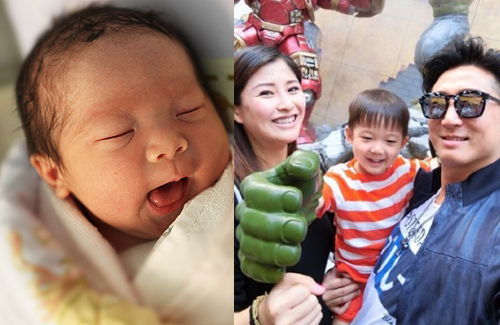 Janet Chow (周家蔚) and Timmy Hung (洪天明) welcomed the birth of their second son, JT, on April 28. Delivering the 7-pound-11-ounce baby was exhausting for Janet, who is currently resting in the hospital.

Grandfather Sammo Hung (洪金寶) was ecstatic over the birth of JT. Glimpsing JT’s features for the first time through video, Sammo said, “He also looks like me!”

Already the mother of two-year-old son TJ, Janet shared how difficult parenting was in an earlier interview. Janet said, “It’s really not easy being a mother! It’s like a full-time job with no vacation days.” She shared that it was exhausting trying to keep up with her active toddler during her second pregnancy.

Janet laughed and said she actually dreaded postpartum confinement the most, “I’m afraid of boredom. I can’t imagine having to sit still for one month. Breastfeeding and changing diapers are not difficult…what’s more difficult will be helping my son understand and deal with having a baby brother. I hope he doesn’t become naughtier because of that! TJ is a precocious boy and sometimes appears as if he knows everything.”

After becoming a mother, Janet set up a successful children’s clothing shop named after TJ. She expressed, “Initially, I only wanted to design some clothes for TJ but I gradually developed it into a line of children’s wear. It’ll be a nice legacy to leave for TJ when he’s older.” The shop has already opened another outlet in the Tsuen Wan district. Janet plans to expand the business in Mainland China after JT is older.