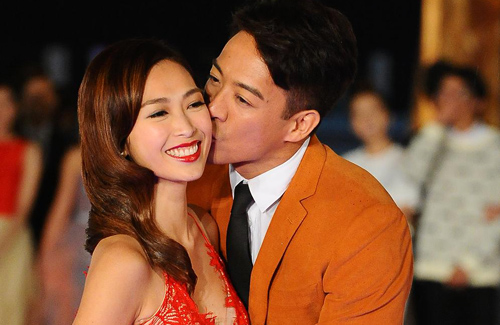 After getting engaged for one year, Jason Chan (陳智燊) and Sarah Song (宋熙年) announced that they have already put in the paperwork to get married within the next three months. The couple will hold their wedding banquet in December.

Jason and Sarah first became close when they worked together as hosts for an entertainment news program on TVB. Since Jason grew up England and Sarah was originally from Australia, the couple immediately bonded due to their western upbringing. Linked romantically for years, Jason and Sarah did not announce their relationship until it was evident they saw each other as marriage partners.

Jason revealed that the planning for their wedding banquet is in the final stages. The only thing left to do was to split the duties among the bridesmaids and groomsmen.

Sarah responded, “We’ve put in the paperwork to get married – that’s just a normal procedure. We will host our banquet in Hong Kong in December as per our initial plans. We’re still in the midst of planning everything so we will let everyone know later. Thanks, everyone!”