Jason Chan, Sarah Song Will Not Have Kids Any Time Soon 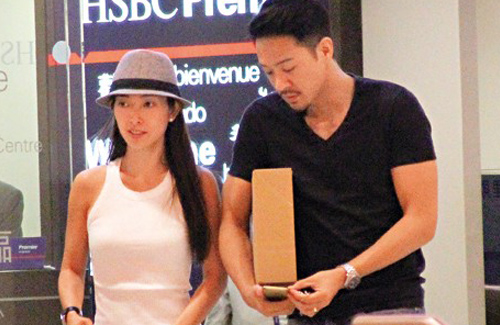 From extravagant weddings like Tavia Yeung (楊怡) and Him Law (羅仲謙) to the low-key wedding of Shu Qi (舒淇) and Stephen Fung (馮德倫), 2016 was a double happiness year filled with celebrity weddings. Among those that have taken the step towards marriage, Sarah Song (宋熙年) and Jason Chan (陳智燊) got married in September. Having dated for seven years, Jason successfully proposed to Sarah in August 2015 and the couple exchanged vows in an intimate wedding in England.

Sarah and Jason honeymooned first in Italy, and then flew to Switzerland and France. Despite having been together for such a long time, the couple hopes to enjoy married life and travel more before starting a family. After returning to Hong Kong, both Sarah and Jason have shifted their focus to work.

Recently, they attended their first event as a married couple.  Jason, who recently began sporting a more rugged look with a mustache, expressed that he hoped to take on more jobs and earn more money before having children. When Sarah was asked whether she liked Jason’s new look, Sarah teased and compared Jason’s mustache to sandpaper, joking that he gives her an exfoliation every time they kiss.

1 comment to Jason Chan, Sarah Song Will Not Have Kids Any Time Soon