One of the few wuxia dramas produced by TVB in recent years, Your Highness, The Hooligan <痞子殿下> stars Kalok Chow (周嘉洛) and Jeannie Chan (陳瀅). Though this is Kalok’s first leading role, Jeannie praised the 25-year-old actor for his professionalism and always going above and beyond for his performance.

Jeannie shared the humorous plot, “We play characters who both have amnesia. Waking up together in bed, we thought we are friends, but it turns out we are actually enemies, and I am actually trying to kill him.”

As Your Highness,The Hooligans is her first ancient drama, Jeannie is adjusting to the challenges of wearing thick costumes in the summertime, while filming fighting scenes with very little rest time. “We try our best to put on a lot of sunscreen, rest whenever we can, and eat healthily. There was one week when Kalok and I didn’t sleep for three days, but now it is all better.”

Working with Kalok for the first time, Jeannie complimented his hard work and professionalism. “Some scripts are not written with a lot of details, but our script is already quite developed. We still like to add our own personal touches though. For Kalok to do well in his role, it is a lot of pressure because his lines are sometimes two pages long, so he will use his own way to act out the dialogue. He is dealing with the role very well, so I really 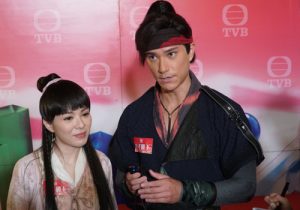 admire him. The only complaint I have is that he eats too little, and I refuse to have him look skinnier than me!”

Singer JW (王灝兒) also has had little sleep since filming Your Highness, The Hooligan, as  she has been filming from 9 am to 6 am the next day. “This is my first TVB ancient drama. I’m very happy and lucky that everyone is very nice. Even though I only sleep two hours every night, and it’s very hot to film outside, but we’re doing this together [as a team], so I feel it’s worth it.”