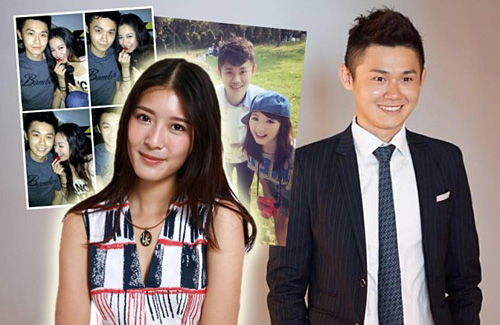 After dating for three years, Carlos Chan (陳家樂) and Jennifer Yu’s (余香凝) suddenly broke up. Although Jennifer said the breakup was mutual, reports claimed that she had cheated on Carlos with insurance millionaire, Victor Hui. The 24-year-old actress was immediately branded a gold-digger. To salvage her career and public image, Jennifer was quick to issue a press release stating that the reason for the breakup was not because of a third party.

Despite her efforts, however, the reports claiming infidelity were not without cause, as Jennifer was spotted spending the night at her rumored new Victor’s home. The media quickly pounced on Victor and did a thorough search of his background, and he seems to have a flirtatious past.

Victor works in the insurance business and earns more than $1 million HKD annually. In addition to his professional successes, Victor is also outgoing and socially active, making him extremely popular with the ladies. He exudes a gentlemanly charm and is generous and attentive to his girlfriends. Victor seems to have a soft spot for models, as his colorful love life consisted mostly of dating models, including Phoebe Hui (許穎), Joey Thye (戴祖儀), and Dominic Ho’s (何浩文) ex-girlfriend, Candy Tong. Despite his attractive profile, Victor also allegedly knows his worth and is quite picky. As soon as the woman he is dating shows any signs of incompatibility or quirks he dislikes, he is quick to move on to the next.

Interestingly, Victor was a former YouTuber personality and posted videos of himself traveling across Russia with a friend.