Jimmy Au Recalls Dangerous Stunts: “It Was Like an Execution” 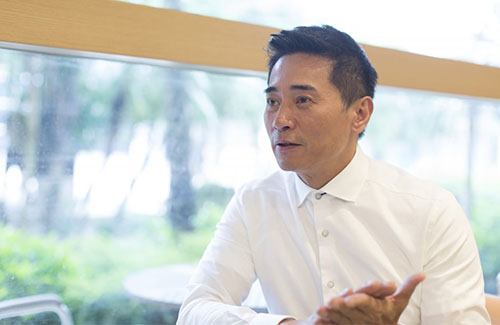 When it comes to the most popular TVB supporting star in recent years, one would immediately think of Jimmy Au (歐瑞偉). The 55-year-old stuntman-turned-actor had landed himself several high-profile supporting roles in the last few years, ranging from Come Home Love’s <愛回家> “KC” to A Fist Within Four Wall’s <城寨英雄> “Yeung Chuk-luen”. Currently, Jimmy plays “KC”—namesake of his role in Come Home Love—in Lo and Behold <開心速遞>, and “Mr. Yik” in the action drama The Unholy Alliance <同盟>. Reporters likened his popularity to TVB siu sangs, and while Jimmy is happy about his success, he won’t get too excited about it.

“I’ve been in this industry for too long,” said Jimmy. “I may be remembered today, but that’ll slowly fade out next month. And in the month after that, I’d be no one again. As an actor, I should do well on my own part. Who knows what the future will hold? Maybe there’ll be fame, but I should take care of myself first.”

Stepping into his 32nd year of debut, Jimmy has seen it all—he’s went from being a stuntman, to a movie lead, to a TV lead, and back to being a TV “greenleaf” actor. Jimmy absolutely understands his role in the game. He doesn’t aim high; just the privilege of having work, regardless of its scope, is satisfying enough for him.

Jimmy, who first started out as a stuntman, recalled some of his scariest experiences: “My job that day was to jump off a building. I thought it would be on the first or second floor, maybe third. It turned out to be on the fifth floor. That was for [1985’s] City Hero <飛虎奇兵>, directed by Dennis Yu (余允抗). I was scared. Another sihing and I counted to three before we jumped down into a pile of cardboard boxes that were stocked a story high. A crowd of people ran up to us, asking if we were okay, and all I cared about was whether or not the camera filmed us. Cam 1 shot us, but cam 2 didn’t. The cameraman couldn’t catch us in time. What happened next? We ran back to the fifth floor to jump down again. It really felt like I was going to my execution. You could hear your own heartbeat. Jumping down a second time was just as frightening as the first. I couldn’t not jump. I needed this job. Fortunately the second time succeeded, and I earned my six to seven thousand bucks.”

City Hero wasn’t the only film where Jimmy nearly had a collision with death. In the 1984 film The Owl vs. Bombo <飛虎奇兵> directed by Sammo Hung (洪金寶), Jimmy and Chin Ka-lok (錢嘉樂) nearly fell to their deaths while doing a stunt on the stairs.

“We climbed over twenty feet of stairs and then fell into a bucket, with nothing to support us. I did injure myself in the process. Big Big Brother (Sammo Hung) said that wasn’t good enough and we had to do it again. He wanted us to make big motions as we fall, but we couldn’t do that. We’d die if we didn’t hold onto the rail.”

Fortunately, the producer of the film stopped Sammo Hung from asking for another take. “There’s a reason why Hong Kong action films are so famous,” said Jimmy. “It was through hard work. What I’ve done was only a tiny portion of what other stuntmen and actors had to do.”

20 comments to Jimmy Au Recalls Dangerous Stunts: “It Was Like an Execution”