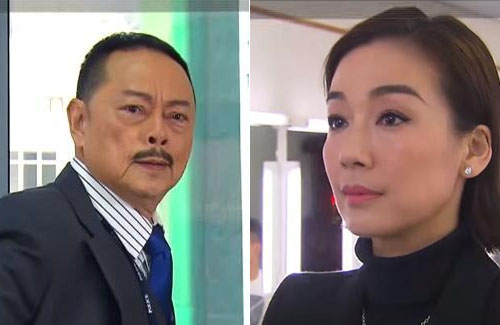 As The Unholy Alliance <同盟> approaches its final week, it is time to drop another final boss hint.

The action-packed drama, produced by Jazz Boon (文偉鴻), follows Ko Tsz-kit (portrayed by Ruco Chan 陳展鵬), who survives an assassination attempt. He follows the assassins to Hong Kong, where he meets his biological family, led by the matriarch and his mother Ling Hung (portrayed by Nina Paw 鮑起靜). He soon discovers that his assassination may have been ordered by a mysterious figure known by the name “Rainman.”

The identity of Rainman hasn’t been revealed yet, but the latest episode has dropped two big hints: that Rainman could be either Yuen Ngai-sze (portrayed by Elena Kong 江美儀) or the black cop Kwok Sir ( portrayed by Law Lok-lam 羅樂林), two new characters that were introduced on Wednesday’s episode.

Yuen Ngai-sze, who holds a governmental position in the Fight Crime Committee, was originally a disciple of Mr. Yik (portrayed by Jimmy Au 歐瑞偉). She colludes with governmental official Lau Chak-sing (portrayed by Timothy Cheng 鄭子誠), and is believed to be the Rainman who had orchestrated Ko Tsz-kit’s assassination. Kwok Sir is also another possible candidate for Rainman.

In an interview with Elena Kong, the actress said she was ordered by the producer to not reveal Rainman’s identity. Asking if she is playing a villain, Elena said, “I really can’t say anything! Yes and no!”

35 comments to “The Unholy Alliance” Drops a Big Boss Reveal