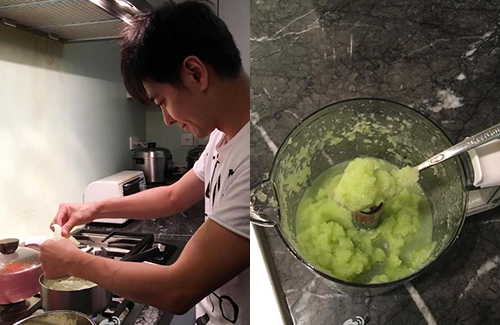 Jimmy Lin (林志穎), who became a father to twin boys last December, loves being a stay-at-home dad. The 41-year-old, who also has a 6-year-old son Kimi with wife Kelly Chen (陳若儀), went on social media last week to update his fans about his current whereabouts.

The Where Are We Going, Dad? <爸爸去哪兒> star said he has been staying at home to cook for his two infant sons. A few nights ago, he shared a picture of himself preparing some Korean cabbages in the kitchen, writing, “I’m making a Korean cabbage dish for dinner tonight. I hope they’ll like it!”

Netizens left behind uplifting and positive messages for Jimmy on social media. “You look too cool! Release that positive energy!” Another said, “Definitely an all-around stay-at-home dad!” 3 comments to Jimmy Lin Cooks Dinner for His Twins!