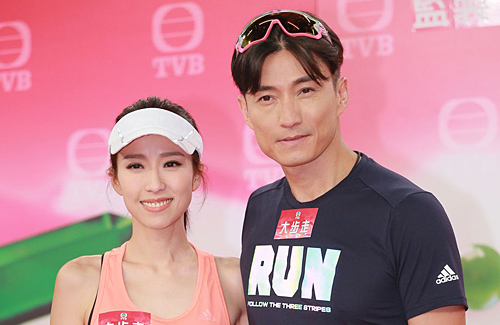 Known to have bonded over their love for running and exercise, Joel Chan (陳山聰) and Elaine Yiu (姚子羚) will lead upcoming TVB drama, Running with Big Steps <大步走>.

The new drama, which revolves around running and exercise, is tailored-made to cast Joel and Elaine, who are both members of the unofficial celebrity running group, Crazy Runner. The lighthearted drama aims to bring positive vibes and messages to audiences. In addition to exercise, the drama will also focus on relationship development between the characters, as well as the ideology of minimalistic living. Joel will star as Elaine’s personal trainer. Many of the scenes will take place in an outdoor sports stadium.

Joel and Elaine attended the costume fitting event dressed in casual exercise gear to complement the theme of the drama. Joel shared, “I’m most happy about not having to apply heavy makeup or set my hair while working. It’s a very comfortable and easy process. However, filming the drama would likely require us to run around a lot, so it will take a lot of stamina. I’m worried that Elaine may not be accustomed to it.”

Elaine, who recently vacationed in Canada, pointed out, “When I was in Canada, I participated in a 5-kilometer run. At the beginning, it was very tiring. However, once I got the hang of my pace, it got a little easier. I have Joel to take care of me while filming this drama, so I’m not worried!”

Although Elaine has a thin frame and may not be as physically fit as Joel, she is no stranger to action dramas. She had many action scenes in The Holy Alliance <同盟>, Justice Bao: The First Year  <包青天再起風雲>, and the soon-to-air Chinatown <唐人街>.