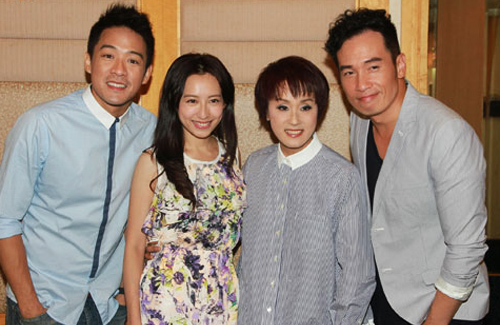 Joyce Koi (蓋鳴暉), who has not filmed a TVB series in six years, returns in new drama, Opera Rouge <水髮胭脂>. She treated Moses Chan (陳豪), Jason Chan (陳智燊), Katy Kung (龔嘉欣), and the cast and crew to dinner as an early celebration.

Joyce and Moses previously worked together in 2003’s Better Halves <金牌冰人>. Despite the decade long time span, the two were like old friends. While Joyce praised Moses for maintaining a humble personality over the years even after winning TV King, she joked about his weight gain.  Joyce said, “It’s ridiculous! We eat half a bowl of rice during dinner, but he eats with a big soup bowl and it adds up to at least two bowls. When I helped him buy a lunchbox one time, he said noodles and a drink weren’t enough and he needed an egg sandwich on top of that. He says he is hungry because taking care of his baby son is hard work and he needs a lot of energy. It’s a good thing he is tall and isn’t afraid of gaining weight.”

Although she enjoyed her filming the series, working until 5:30 a.m. took a toll on Joyce’s sleep. Despite the hectic filming schedule over a two-month period, Joyce would still continue filming for TVB in the future.

Jason Saving Up for Marriage

Jason Chan recently revealed his romance with Sarah Song (宋熙年) to the public. Afterward, he revealed his intent to get married within the next few years. Jason and Sarah regard each other as marriage partners and have met each other’s parents. Before the wedding takes place, Jason is focused on earning money and adding to their future savings pool.

“Right now, we’re saving up to buy a property. It’s going to take at least a year, but within four years. If we suddenly want to get married and the timing is right, it’s a possibility too. We have to get married first [before having a child]. I hope everything will happen according to our plans,” Jason said.