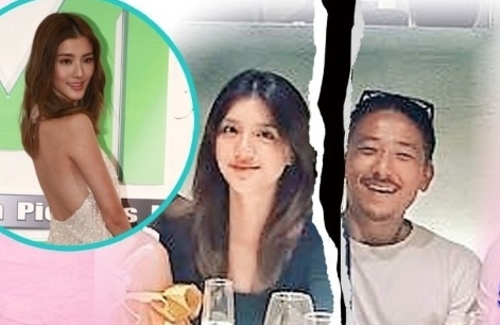 When Karena Ng (吳千語) ended her high-profile five-year relationship with Raymond Lam (林峯) in late 2017, the actress reportedly began dating wealthy heir Brian Shi (施伯雄). The 25-year-old actress met him through their mutual friend Tianyo Ma (馬天佑) during the same time that Raymond was trying to salvage their relationship but to no avail. Since then, Raymond has moved on and found himself a new girlfriend, Chinese model Carina Zhang (張馨月), and Karena has been going steady with her new beau. In a turn of events, Karena announced she is single once again.

Although Brian, the grandson of real estate entrepreneur Shi Ziqing (施子清) born into a family with a net-worth of over $10 billion HKD, never confirmed Karena was his girlfriend, they were often spotted going on vacations together. Just last October, the two headed back to Brian’s place in Hillsborough Court situated at the Mid-levels – just across the street from where Raymond lives – after returning to Hong Kong from an overseas trip together.

However, Karena provided the latest update in a recent interview and publicly declared she is single. In fact, when she was asked if her busy work schedule allows her to spend time with boyfriend Brian, she told the media that if she has a boyfriend she would put work first. Afterwards, the media tried to reach her for a comment on the matter, but her manager said Karena is in the Mainland, “Karena has always been working hard, prioritizing her career!”