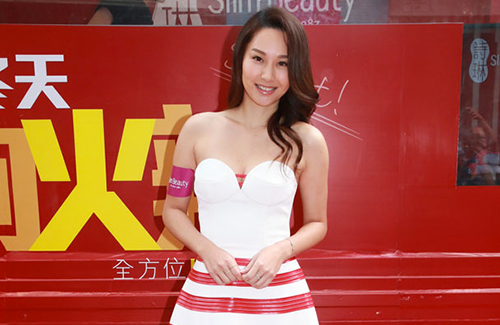 As an endorser for the Hong Kong slimming and skincare brand SlimBeauty, Kate Tsui (徐子珊) attended a promotional event for the brand’s new service in the crowded streets of Causeway Bay yesterday. Looking absolutely gorgeous and sexy in her low-cut white dress, Kate surprised the audience with a few magic tricks she did with a magician.

In her new ad for the skincare brand, Kate wore only a bikini. However, Kate said she does not have the guts to wear a bikini in public, admitting, “Social anxiety. I do have a phobia of crowds. I don’t often go to places where there are a lot of people, but this is something I cannot avoid because of work. But I am feeling okay now, because I know there are people [security] around to protect me.”

Kate’s management contract with TVB has already expired. The actress is currently rehearsing for her upcoming co-headlining KITEC concert Our Goddesses, while also working on her new jewelry designs, which she plans to release in December. Although now a free agent, Kate is in talks to star in a Mainland Chinese drama.

Asking if she has decided on a new management agency yet, Kate revealed, “I am still in discussions with [TVB’s] Miss Lok, but if I am to sign a new contract, it won’t be until next year. I am not in a hurry.” Kate denied the reports claiming that Johnnie To’s (杜琪峯) agency wants to sign her. She said, “Those are just rumors!”

7 comments to Kate Tsui Still In Discussions with TVB