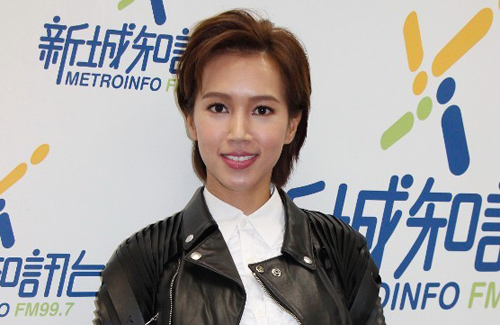 With TVB’s diminishing supply of seasoned actresses, the company has been frantically pushing new faces into leading roles in recent years.  Model-turned-actress Kelly Fu (傅嘉莉) is one of the rising young stars enjoying the heavy promotion. Kelly recently attended a promotional event for the new TVB drama, Married but Available <我瞞結婚了>, in which she stars in a significant role. The drama focuses on the issue of balancing life and work.

Kelly praised the realism of the drama’s script. “It talks about how relationships and career are hard to balance. A lot of employers do not like their employees getting married and having children.” Reporters teased that these limitations seem to occur more often in the entertainment industry. However, Kelly refuted the stereotype and exclaimed, “That’s not true. Under my contract, I’m allowed to date, get married, and have children. Many artistes in the company are also couples. The company is very open. As long as you take your work seriously, then it’s okay.”

Although Kelly possesses a sweet demeanor, the 32-year-old is wrought with negative rumors regarding her love life and tendency to date older, wealthy men. At one point, Kelly was reported to be dating several married wealthy men at once. She has since denied the rumors and stressed that she is currently single. She candidly admitted that she is not good at dealing with conflicts in a relationship. With so many opportunities from TVB, Kelly now hopes to focus on her career. “I don’t want to have anything that I can’t handle or deal with right now.”

Despite her claim of wanting to focus on work, dating may not be completely off her radar. Kelly was recently photographed kissing a man on a taxi. She clarified, “I don’t consider him to be my boyfriend. That’s the wrong impression. I will leave things up to fate. Dating is difficult. There are a lot of things to worry about.”

When asked whether she hopes to find a rich second-generation heir, she said, “Not all of them are admirable. He has to be more successful than me. Someone who only reaps from the family fortune is not always good.”

She revealed that her ex-boyfriend, who works outside the entertainment industry, has already settled down and has a family now. When teased that she lost out, Kelly coolly responded, “Maybe the best one for me hasn’t shown up yet? If I married him, I may not be happy. I’m not jinxing him. I do hope he has found happiness.”