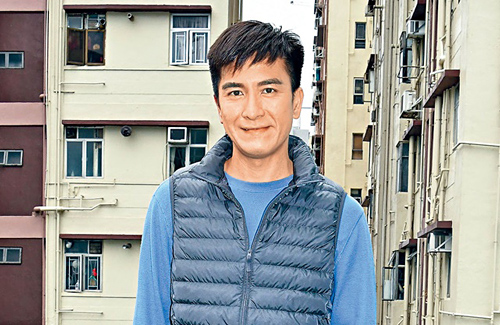 Ever since Kenneth Ma (馬國明) asked for forgiveness on behalf of Jacqueline Wong (黃心穎) even though she had cheated on him, his popularity has shot through the roof. He has many dramas lined up and companies want him as their spokesperson.

In regards to netizens bestowing him with the title of “Best Man Ever”, Kenneth humbly said that he is not worthy of this title. Reporters asked him what he thinks that he is lacking and he replied that he is not sure but in his mind, the two men worthy of the title would be Chow Yun Fat (周潤發) and Sean Lau (劉青雲). Both actors have very successful careers and are able to maintain blissful marriages over many years.

Kenneth, Mandy Wong (黃智雯), Moon Lau (劉佩玥), and C Kwan (C君) are currently filming for The Exorcist’s Meter 2.0 <降魔的2.0>. In a recent scene, Kenneth had to fight a strong evil spirit and Mandy persuaded C Kwan to help him fight them, but instead he conjured a level 10 typhoon to test Kenneth’s abilities and perseverance!

Kenneth was very focused throughout filming and did not let Jacqueline’s scandal affect his professionalism. Mandy and Moon praised him on his work ethic and neither wanted to comment further on the scandal. Instead, Mandy shared that they were both very busy, she would be going to North America soon for a TVB event and Moon would be going to Europe for a photo shoot.

Kenneth indicated that it has been raining for the past few days which has affected filming progress. They predict that they will finish filming at the end of May. It is rumored that he may clinch the coveted Best Actor award this year with this drama, but Kenneth is not sure if the drama will air in time as there is a lot of CGI work that needs to be done in post-production.