Kenneth Ma Goes Outside the Box 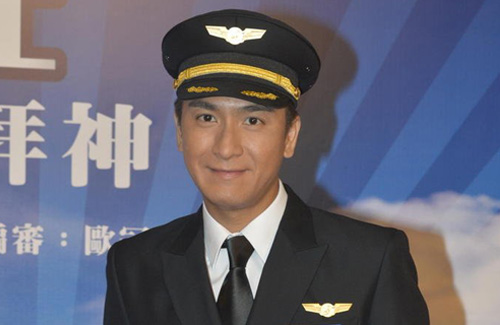 Thirteen years after joining the industry, Kenneth Ma (馬國明) cemented his star status with 2012’s The Hippocratic Crush <On Call36小時>. The 39-year-old considers himself one of the luckier artists.

“The road I walked wasn’t considerably difficult. I am one of the luckier ones, because there are still many seniors out there who are still waiting for their chance.”

Ten years ago, Kenneth was cast in a small supporting role, Roy, in Triumph in the Skies <衝上雲霄>. Along with costars Ron Ng (吳卓羲), Sammul Chan (陳鍵鋒), and Bosco Wong (黃宗澤), Kenneth was promoted as TVB’s S4.

Ten years later, Kenneth was invited to star as Roy again in the Triumph in the Skies sequel. Facing big stars like Francis Ng (吳鎮宇) and Chilam Cheung (張智霖), Kenneth’s role is reduced to a supporting actor again, but Kenneth is not sensitive when it comes to status.

“This series is very important to me. After three years of portraying random ABC characters, I had my first consistent role in Triumph in the Skies. The significance behind this sequel is very big. I am playing a supporting character in this drama, but I really don’t care if I am a lead or not. What matters most is whether or not my storyline is interesting to watch. For example, I only had four episodes of screen time in The Other Truth <真相>, but I love it. Every drama requires teamwork. I don’t have to worry about carrying it on my own. What I do get worried about is whether or not the drama is well-accepted by the public. I do want to change my style.” Kenneth added that he wouldn’t mind getting a best supporting actor nomination, reasoning that any award would help him earn more money.

In Triumph in the Skies 2, Kenneth is involved in a relationship with Elena Kong (江美儀) who is older than Kenneth’s character. A few viewers found their relationship to be of extremely “heavy taste” and some went ahead to call Elena a cougar.

“It really depends on whether or not you can accept an elder-woman-younger-man relationship,” said Kenneth. “As for me, I’m okay with it. In the drama, both of the characters get along really well, so naturally, they got together. I’ve never experienced this type of relationship in real life, but I believe that if you do like someone, age shouldn’t be an issue.”

Kenneth added that perhaps his image as a TVB siusang influenced the audience to be against his relationship story with Elena. “At the start I knew there would be a sister-brother relationship. Maybe it’s because the audience thinks that I should be with actresses like Tavia Yeung (楊怡) or Selena Li (李詩韻), so it’s odd to see me with Elena. As an actor, I really don’t care. In the future, if I am required to play a gay character, I will do it. I never trap myself in a box. In the world of acting, as long as it is reasonable, I can do anything. I will not have my beliefs in real life affect my performance in acting.”

Due to his busy schedule, Kenneth had to reject several great filming offers. Fortunately, he secured a role in an upcoming film, which will be shooting soon.

Kenneth admitted that he did not have the time to study the script, but expressed that when it comes to filming movies, he will not limit himself. “Film and television limits are different, but still, it depends on whether or not the scenes are reasonable. If you there is a bed scene I have to do and it sends a message, I will do it. As an actor, we really shouldn’t care anyway.” Is Kenneth excited? “A little bit. After all, I’ve never filmed a movie before. I really want to work with outside actors and directors. You never know – maybe this experience will help me with my work at TVB as well.”

How about his dating life? Kenneth laughed, “I don’t know! I just want to concentrate on my work.” Will he give an older woman relationship a chance? “I really don’t know. I’ve never encountered this before, but honestly, young girls are not for me. I don’t mind being called an uncle, but when it comes to young girls, I really don’t know how to take care of them. It’s tiring. I want her to have her own mindset and be mature. I don’t want her to be like a child.”

Rumor has it that it is extremely difficult for a television actor to make it big in the film industry. If you can watch the actor for free on television, why pay the extra cash to see the actor in a movie theater?

“I’ve heard of that before. Many seniors have told me that you really want to make a name for yourself in film, you have to hide yourself for a while. But I don’t think the difference is that big anymore. Of course, film and television are two different languages. In a movie, the director has more say on what you should do, while in television, it’s exactly the opposite. The actors have more freedom.

“It’s just my first movie. There are still many things I want to try, many characters I want to portray. I also want to do theater if I have the chance. I hope to have more opportunities to try new things in the future.”

Asked if Kenneth sees a day where he will leave TVB, he said, “I am someone who is rather stable. I have a burden to carry, and unless I have reached a certain spot, to the point where others are willing to wait for you instead of being replaceable… but I want to save some more bargaining chips first. After all, my company has been treating me really well. They gave me many opportunities to try something new. They really take care of Kenneth Ma.”

66 comments to Kenneth Ma Goes Outside the Box